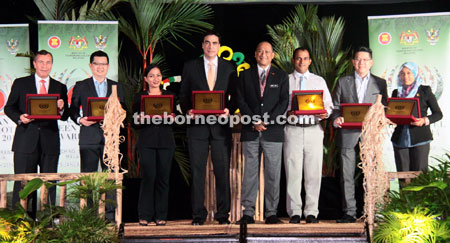 KUCHING: Riverside Majestic Hotel Kuching and Miri Marriot Resort and Spa were among the 86 hotels across the Asean region to receive the prestigious Asean Green Hotel Award 2014 yesterday.

The bi-annual award ceremony which is held in conjunction with the Asean Tourism Forum (ATF) 2014 held at Pullman Hotel also saw another eight hotels from Malaysia receiving the recognition.

“This award is presented to hotels which adhere to green and sustainable practices, are environmentally friendly and adopt energy conservation measures based on the criteria and requirements in the Asean Green Hotel Standard,” said Tourism and Culture Minister Datuk Seri Nazri Abdul Aziz.

He also said the primary objective of the award is to provide the well-deserved recognition to hotels that go beyond conventional practices and embark on green and environment friendly measures in support of responsible tourism.

The award presentation which started in Thailand in 2008 was also held in Brunei Darussalam in 2010, followed by Indonesia in 2012.

According to Nazri, there is an increasing demand by tourists for hotels which adopt green practices as proven by studies which showed that demand is higher than the supply of green hotels.

“Hence, these green hotels fetch a premium in their hotel rates as well as reduce the cost of operations and enhance revenue in the long run,” he added.

He also said that the move can also be seen as an integral initiative to support the current work of Asean to develop the Asean Ecotourism Strategic Plan which promotes responsible tourism and green practices in the tourism industry.

Each of the awards was presented by the respective country’s own minister of tourism in a ceremony witnessed by more than 250 attendees.