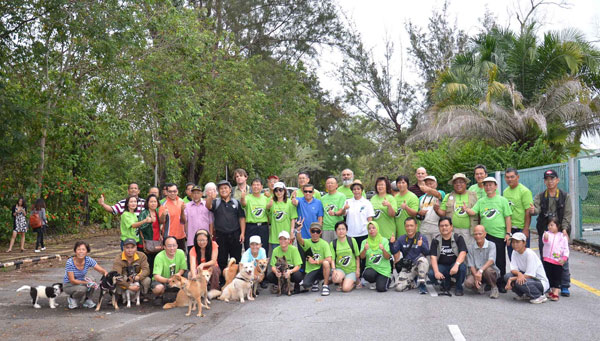 (Second row, from fifth left) Professor Maketab, Sebastian and Musa (fourth right) and a section of the participants of the 8th Hornbill Walk.

MIRI: The people of Miri can help the government to make a success of the proposed nature reserve at Piasau Camp.

“We have lot of advocacies to save urban forests. A good example is Kota Damasara near Petaling Jaya where we have the society taking care of the forest with Selangor Forestry.”

Chairman of MNS Miri and PCMNPS is Datuk Sebastian Ting.

“We have the society (PCMNPS) working with Sarawak Forestry to take care of the place and make this something all of us should be proud of,” Professor Maketab said before the start of the 8th Hornbill Walk held at Piasau Camp on Saturday.

part in the walk. Others participants were the wife of PCMNPS’ president, and the society’s exco members

Professor Maketab said it was the tradition of MNS headquarters to support whatever the branches do and that they were proud MNS Miri had spearheaded the advocacy for the conservation of historical Piasau Camp.

“Basically, it is not for MNS or personal glory. Our target is to make sure something like this (Piasau Camp) can be preserved in perpetuity for the people of Miri.

“I think our great grand children will thank us for what we are doing today, so they don’t have to go far for a nature walk and for recreation,” he said.

Earlier, Ting assured the people that their cause was not in vain, although the government had delayed gazetting the nature reserve.

“We are going in the right direction and we urge Mirians in particular to continue supporting to make the nature reserve a reality,” he said.

Hornbill Jimmy, his soul mate Juliet and other offspring did not show up during the walk, but at the end of the walk the participants got to see the carcass of Jimmy’s ex-soulmate Faridah which had been preserved for public viewing once the nature reserve is ready.

Many were sad over her brutal killing on Sept 26, 2013, but were glad the taxidermy was done and the exhibit handed over by a representative of the company doing the taxidermy to Musa and others representing MNS and PCMNPS.

Besides having hornbills and other protected animals and plants, Piasau Camp is synonymous with Miri’s oil and gas industry, and the matured forests act as the green lungs for Miri City and a buffer zone against tidal waves.