Saturday, February 22
You are at:Home»News»Sabah»Sabah seas for tourism in conservation 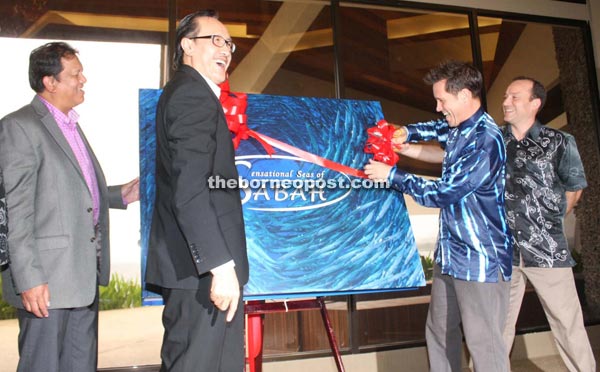 Masidi Manjun launching the book, ‘The Sensational Seas of Sabah’ by Scubazoo, in the hope for tourism to exceed last year’s revenue of RM5.7 billion from the industry this year.

Tourism, Culture and Environment Minister Datuk Masidi Manjun told press members after launching the book: “The Sensational Seas of Sabah” by Scubazoo yesterday that they expected to exceed last year’s revenue of RM5.7 billion from the industry this year.

“At the same time, the ministry also expects to exceed last year’s tourists arrivals of 3.2 million,” he said.

He then went on to say the revenue generated from the tourism sector had now exceeded the logging industry, which was once the state’s major revenue generator.

“The income from the logging sector was once RM2 billion but last year, it generated only RM1 million – it was due to the decision of the present Chief Minister who decided to cancel the logging concessions in Sabah several years ago. It was a bold step to ensure that the forest was conserved and less trees were cut,” he said.

He described the decision by Chief Minister Datuk Seri Musa Haji Aman as a wise one and that Sabah was now reaping the fruits from that wise decision since the income generated from the tourism sector now exceeded that of the logging sector.

“In the logging sector, we realised that once the last tree was logged, that was the end,” he said.

He then called on the industry and the people of Sabah to support efforts to look after the state’s natural heritage and not let the quest for more profit to deter them from doing what is right.

“We need the strength to look after our islands, our nature and disallow acts that lead to degradation – that is why we limit the number of visitors on Sipadan to 120 people daily and to the Kinabalu Peak to 192 people daily. If our quest was for more profit, we will soon lose Sipadan and Kinabalu. I hope the industry will support this,” he said.

He also said as a result of the conservation efforts undertaken by various parties in Sabah, the state was now endowed with a rich natural heritage that is unmatched by many other countries in the world.

“And what we have underwater is not enjoyed by other places in the world,” he said.

Meanwhile, Jason Isley, the managing director of Scubazoo said their newly launched book was geared towards enticing tourists to visit less visited islands in Sabah and reduce the pressure on Sipadan Island.

He said the book presented some 300 powerful and emotive images gathered throughout a journey along the stunning coast of Sabah.

“Beginning in the south west on Tiga Island in the South China Sea, we travel to the Tip of Borneo and the Sulu Sea before making our way south through the Celebes Sea where our final dive destination is the world famous Sipadan Island,” he said.

In describing the condition of Sabah’s coastline, Scubazoo operations manager Simon Enderby said he could see a lot of improvement in the conditions of the reefs that were once decimated.

“In just a short time of rehabilitation efforts by resorts, corals have come back. You can see a lot of improvement,” he said.

He added that these could be seen on islands like Langkayan and Selingan.

He also attributed the positive changes to awareness programmes that have led to a reduction in the number of people using fish bombing methods to catch fish.

“Over the years, Sabah has done well to contain dynamite fishing,” he said.