Saturday, August 15
You are at:Home»Features»The jungle at night 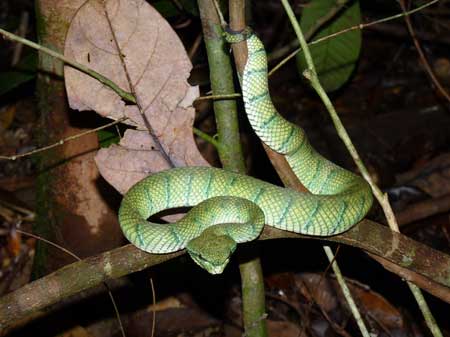 The Malaysian pit viper is a dangerously beautiful creature. 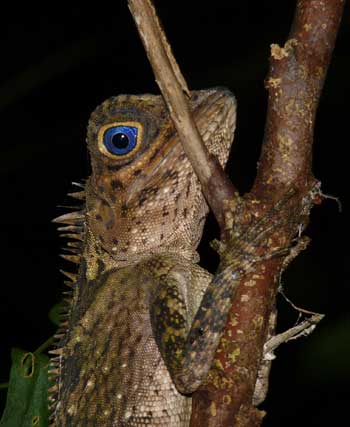 THE silence and the darkness of the tree-shrouded path at Camp Permai Rainforest Resort were shattered.

About 90 two-legged creatures armed with torchlights, mosquito repellent and cameras swarmed out of the conference room ready for an adventurous introduction into the night jungle world.

However, were the creatures of the night jungle ready to face the two-legged ones?

A large spider of undetermined species had staked out a leaf along a well-travelled trail for the night, probably hoping for prey to appear and then it would capture the prey from the depth of the darkness hiding its dark brown body.

However, the predator became the prey of the flashing lights. It stayed put. It didn’t move. The flashing camera lights must have disturbed its night vision, but still it remained – a stationary model for the visitors.

Night predators, such as this spider, tend to stay in one place even when surrounded by flashing lights. They hunt by camouflage and the night provides the cover.

Spiders, like scorpions, are air-breathing arthropods with eight legs. An estimated 40,000 spider species inhabit all corners of the world except Antarctica.

All spiders, except one species, are predators that prey on – depending on their size (ranging from two millimetres to hand-size) – tiny insects, ants, spiders and birds.

Most spiders also spin webs designed to catch and subdue prey. Young spiders have been seen to eat nectar, and the extent of this habit is relatively unknown as they are predominantly nocturnal.

The noisy crowd and the bright lights dissipated down the trail to the next victim. The large brown spider, with relief, slid back into the darkness, waiting for the next unsuspecting visitor.

Meanwhile, gasps of disbelief filled the night, an angle headed lizard, sure of its cover, had not fled into the darkness. In a flash, flashing lights surrounded it; it was penned in by light.

The greyish brown lizard with the upright crest should have been hidden as is clung to the tree trunk, but it was spotted by the sharp-eyed guide who then pointed it out to his charges. We were enthralled and wanted desperately to take memories in pictures to the security of our homes.

This lizard, like the spider, must have gratefully slid back to darkness when the lights flitted down the trail.

Our guide Hans has a knack for locating snakes, and on the walk, he located a Malaysian pit viper draped around a fork in a bush. We, of course, marvelled at the vivid lime green diamond pattern of this potentially dangerous animal. 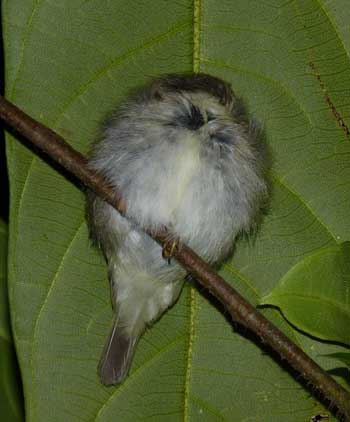 A sleeping bird – with fluffed grey and white feathers – seeks cover under a large leaf.

But despite taking on the role of jungle paparazzi, we stayed out of striking range. The colours, the flexibility and its calmness only increased our respect and knowledge that we were privileged to be there and to see this dangerously beautiful creature first-hand.

The trek, the lights and the hushed whispers gradually moved along. The Malaysian pit viper, like the other creatures, slid back into the darkness.

The next star was a gliding/flying lizard. Questions were raised about the species. Which of the seven Draco species that, like the angle headed lizard, are members of the Agamidae family, did it belong to?

These subtly coloured lizards spread a thin flap of skin that is attached to their fore and back legs and then glide off. Identification is through colouring, but the one we saw was a bit brownish and was cleverly hidden until the lights unearthed it.

The walk was almost over. We scrambled across a boulder-strewn dry (or mostly dry) stream-bed and came up onto the Camp Permai Resort path that edges the South China Sea. The two-legged jungle paparazzi fled towards the comfort of the light.

Some stragglers took the slow boat back to light. Along the path, when we looked up, a dozing bird had fluffed its grey and white feathers and sought cover under a large leaf.

It clung to the end of a small twig even while it slept. We were told that this is a safety precaution, because it would be jolted awake if the twig moved and it fell.

The tiny bird was lost in sleep and it seemed that we should follow.

The remarkable walk was one of the many activities organised as part of the Santubong Nature Festival, which was held last November. There will be a second one this year.

The objectives of this event are to:

The hugely popular jungle walk definitely enabled the participants to learn more and to experience another world.

For more information on the Santubong Nature Festival and to view pictures log onto the Malaysian Nature Society Kuching Branch’s blog at mnskuching.blogspot.com or www.facebook.com/mnskb or email [email protected]

Previous ArticleSomewhere over the rainbow
Next Article Running the political marathon