Monday, November 28
You are at:Home»Features»Walking into AD79 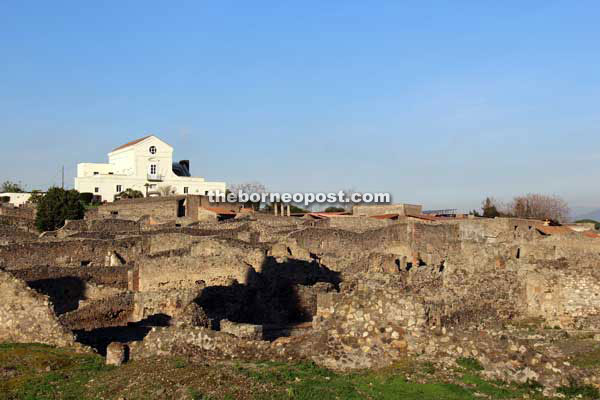 Gaping cavities on concrete ruins dating back to AD79. 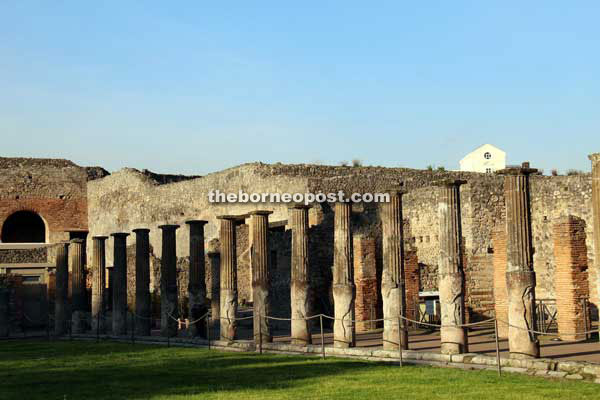 The columns of an ancient building still standing after devastation from the volcanic eruption in AD79. 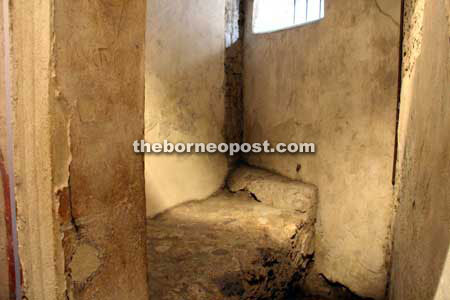 This is what a brothel of antiquity looks like in the city of Pompeii.

In South Italy, Phyllis Wong comes face to face with how the Romans of the first century lived and is awed

I WAS caught somewhat unprepared for my trip to Italy due to a mess up of the travelling date on my part even though all arrangements had been made one month in advance.

My flight from Kuala Lumpur to Dubai enroute to Rome on Emirates Airlines was on Jan 6 at 01:10 hours. I mistook it to mean I should fly out from Kuching on Jan 6 at 8pm.

Lo and behold, on Jan 4 night (Saturday), as I was checking my Kuching-Kuala Lumpur sector online, I suddenly realised I should be travelling to KL the next day (Jan 5) – not on Jan 6.

It would have been quite a panic had I not kept my packing list in order. My travelling schedule was out of kilter but it was nothing that couldn’t be fixed … thankfully.

There were a few things I had to do in the office on Monday – only that now, I had to do them on board the aircraft. So that put paid to my plan to read the itinerary and get to know a little of the places I would be visiting.

But it was not all downhill as Emirates’ country manager had upgraded my seat to business class all the way. Travelling in complete luxury on a holiday trip wasn’t what I had expected but life can sometimes throw up a pleasant surprise or two! And I am grateful.

Come to think of it, who needed to read the itinerary when there were movies to watch, a mini-bar beside your seat on top of the generous space, privacy and sumptuous food on board?

Twenty hours from airport to airport, I arrived at Rome fully pampered by Emirates and excited but not knowing fully what to expect (I wished I had read the itinerary) as a first time visitor to a country steeped in history and famous for elegance, operas, cultures, arts, Ferrari and Andrea Bocelli.

But after a beautiful welcoming dinner at Le Terme Del Colosseo, a restaurant in a 15th century building, amidst beautiful love songs and great food, I was settled for the days ahead.

A visit to Rome would not be complete without a shopping spree. We stopped at a designer outlet with an impressive array of shops selling all types of designer brands.

Not a Prada person – as are my Malaysian fellow journalists on the same trip – we each settled for a cooking pot and some sportswear which were a lot cheaper than in Malaysia.

A shopping trip does tell a lot about the economy of a country. From my observations, Singaporeans are surely all Prada’d and the Filipinos are fantastic shoppers but it appears very difficult to make those from India, Malaysia and China take out and open their wallets.

One Filipina whispered to me: “We are poor but shopping is a disease. No matter what, we still shop.”

Shopping is a disease – quite a statement, wouldn’t you agree.

We drove to Sorrento – a journey of breathtaking scenery. Our first stop was Pompeii, a Unesco Heritage Site.

Pompeii is the only place in the world where you can walk into the daily lives of First Century AD Romans. Their high-society life is evidenced by relics such as magnificent amphitheatres, SPAs (ancient public baths), health clubs, gyms, dwellings of the ordinary people, restaurants, take-away counters – and brothels, yes, brothels!

Did Pompeii, located near Naples in Southern Italy, freeze in time? No, the eruption of volcanic Mount Vesuvius devastated mad Emperor Nero’s favourite city nearly 2,000 years ago in 79AD but the ashes and rocks have helped preserve many of the buildings in almost their original state.

Walking in the city provides an insightful peek into the daily life during Roman times. Pompeii has been a Unesco heritage site since 1997 and is the best preserved ancient Roman site in the world.

When I was young, I had always been fascinated by detective novels. So picking up Roman mystery story books, written by Caroline Lawrence for children some 10 years back as an adult, was essentially reliving the fantasies of some of my childhood heroes.

It was such a thrill to remember the four young heroes caught in the cataclysm of 79AD as I sauntered along the high pavements, hopping across the road on stepping stones, peering at the ruts made by generations of Roman carts.

I consider myself very blessed for being able to see the vivid depictions of Roman civilisation through Caroline Lawrence’s eyes! 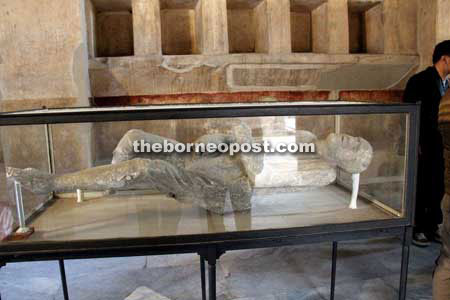 The cast of a dead body on display in a glass case.

For a while, I did imagine myself as Nubia, the African slave girl, while my fellow Malaysian journalists were Flavia, the rich Roman girl, Jonathan, the kind Christian boy and Lupus, the mute beggar boy, as I tried piecing together how the Romans had lived and died.

We entered a room where some “dead bodies” are displayed – mostly curled up. The tourist guide Enrico was quick to clarify: “These are not real bodies but plaster casts.”

What happened was in excavating the volcano-ravaged city, workers found human-shaped pockets of air where human bodies had rotted away but the surrounding solidified deposits had kept their original forms.

A hardening foam was injected into a hole of the cast and the body in the cast was pulled out in its exact final death shape.

There are 700 of these “dead bodies” in and around the ruins. It was like seeing how Pompeians had met their end – crouching in terror, some burying their heads in their hands, clinging to each other – even their facial expressions are preserved!

It was hard not to ask whether there was any signal or warning that the volcano was going to erupt? If so, why hadn’t these people abandoned the city and escaped?

“If you think the houses here look under furnished, the best answer is the 17,000 had loaded their best possessions and escaped before the eruption,” he reasoned.

So, those who insisted on staying would be the poor, the sick and the overly optimistic, I assumed. They sat, walked and worked to death. What cruelty, how tragic!

Pompeii is huge – it’s endless walking, ruins after ruins, houses after houses. So, it’s important to have a guide to show you what are the sights to see, and a good pair of walking shoes certainly helps.

Our group of 28 journalists and tour operators from Asia were fortunate to have Trafalgar, the expert in Europe tours, that knows Europe inside out, to literally “talk into our ears” with each of us holding on to a radio with earphones plugged in all through the walk.

There are a few “must-see” sights. Naturally, we were interested in the brothels – yes, brothels.

There are 35 of them but Enrico told us – with much humour – he would only show 34 of them to us. Actually, the numbers differ – from five to 35.

Someone in the group playfully “acted” out the life of a prostitute in one of the rooms beside a small short stone bed while another man whispered:

“How many times do you get the chance to walk into such a red light district of antiquity in the name of history and take pictures of one other in the name of tourism without being questioned by your spouse?”

Who actually said that? A Malaysian, Indian or Filipino in our group or was it the participant from China? Incidentally, there was no male participant from Singapore. Make a guess – I really can’t let on in the name of protecting my source.

Do you know what Roman bathing was like in AD79? There were nicely decorated rooms for a good steam with, surprisingly, rooms for males and females and even a gym. The men’s section were considerably better furnished than the women’s.

How do you tell the men and the women’s sections apart?  Enrico revealed some combs, male toiletries and a couple of dirty books in the former but later admitted the dirty books were imagined, not recorded.

So, the Sabina Baths is the next interesting place that you must see.

There is then the beautiful theatre – the earliest amphitheatre to be preserved anywhere in the world. I sat in awe of the moment, imagining how the Romans acted in skits and created characters –and how on some beautiful evenings, Roman ladies, dressed in their best, would watch the shows.

The best preserved private house is called The house of tragic poet which displays a Beware of Dog mosaic at its entrance.

It’s really not a thing of our times. I always wondered about the chronological age of the sign when I saw it displayed at the entrance of houses – a warning dating back to AD79.

As I dreamily hopped across the stepping stones, I was rudely brought back to our time by election slogans painted on the walls by hopeful Roman candidates for high office, with Mount Vesuvius, the still active volcano, looming over the Bay of Naples.

No qualms about it. Pompeii is unforgettable. 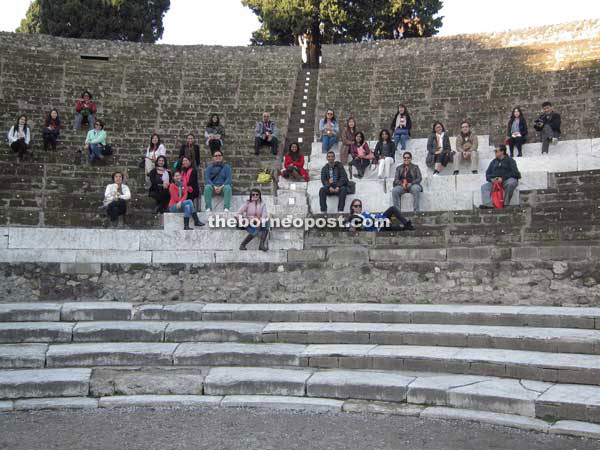 Tourists sitting on the terraces of the partially restored amphitheatre. 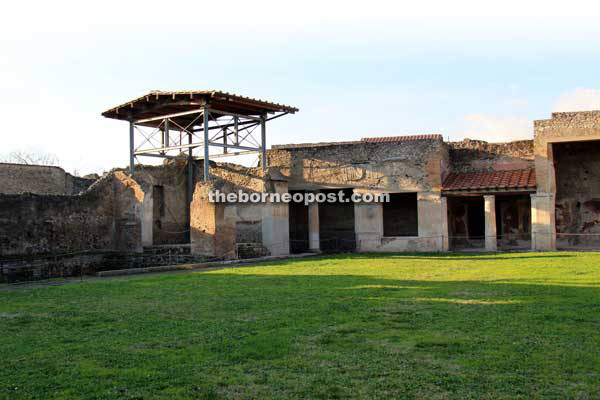 This looks like a fort but it is actually a public bath of ancient Pompeii.