Saturday, October 1
You are at:Home»World»UN fails to break deadlock in Syria peace talks 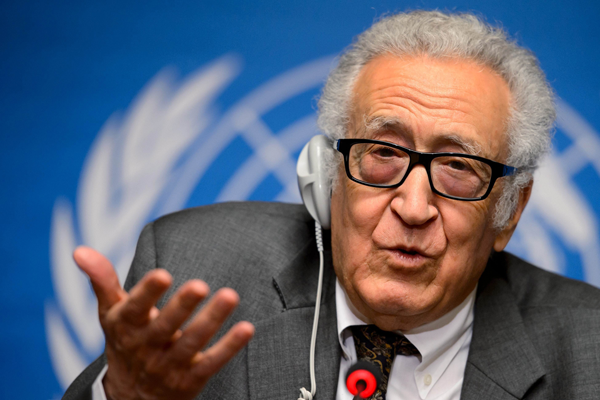 GENEVA: The UN failed to break a deadlock at Syrian peace negotiations in Geneva yesterday, with talks interrupted after the regime railed against Washington instead of dealing with a transition of power.

There was also no movement on bringing relief to besieged residents in Syria’s central city of Homs, where UN trucks are waiting for access to deliver desperately needed food and medical aid.

After a difficult morning meeting on the fourth day of talks, UN mediator Lakhdar Brahimi said he had decided to cancel afternoon talks and reconvene the parties for “what I hope will be a better session” yesterday morning.

“Nobody is walking out, nobody is running away,” Brahimi told reporters.

“We have not achieved any breakthrough, but we are still at it, and this is good enough as far as I’m concerned.”

A member of the opposition negotiating team, Rima Fleihan, told AFP that Brahimi adjourned the meeting “because the regime is not cooperating on any subject, not on humanitarian issues and not on a transitional governing body”.

She said the opposition had presented a preliminary transition plan laying out its “vision” for Syria, but the regime refused to engage in talks.

“We have a vision, unfortunately the regime presented nothing and refused all discussion,” Fleihan said.

The statement, obtained by AFP, said “the United States has made a decision to resume arming terrorist groups in Syria”.

“This decision can only be understood as a direct attempt to obstruct any political solution in Syria through dialogue,” it said.

It follows a report from the Reuters news agency that the US Congress secretly approved funding for weapons deliveries to “moderate” Syrian rebel factions.

Syrian Deputy Foreign Minister Faisal Muqdad said that showed Washington “is not interested in the success” of the peace process.

“The Assad regime is a magnet for terrorists. The regime’s brutality is the source of the violent extremism in Syria today,” he said in a statement.

“We support the moderate political and military opposition who are fighting for the freedom and dignity of all the Syrian people.” Delegates from the regime and the opposition National Coalition have been brought together in the biggest diplomatic push yet to end a civil war that has left more than 130,000 dead and forced millions from their homes.

Expectations are low for a breakthrough, especially after the talks hit an impasse Monday when the two sides failed to agree on even the basic principles of political talks.

Despite their frustration, each side vowed it would not be the first to walk away from the talks, which are expected to last until Friday.

In the only tangible promise to emerge from the meetings so far, Brahimi said Sunday the regime had agreed to allow women and children safe passage from besieged rebel-held areas of Homs.

But there has been no movement since, on either an evacuation or Brahimi’s hope that aid convoys will be allowed in the areas.

The Old City of Homs has been under siege since June 2012 after rebels there rose against the regime, with an estimated 500 families living with near-daily shelling and the barest of supplies.

UN bodies and the International Committee of the Red Cross have said they are on standby with aid but are waiting for approval to move in. “The convoy is ready and still waiting to enter. The authorisation has not been given yet,” Brahimi said. “We haven’t given up on that.” — AFP