Saturday, June 19
You are at:Home»News»Sarawak»Loss of James Shoal could wipe out state’s EEZ 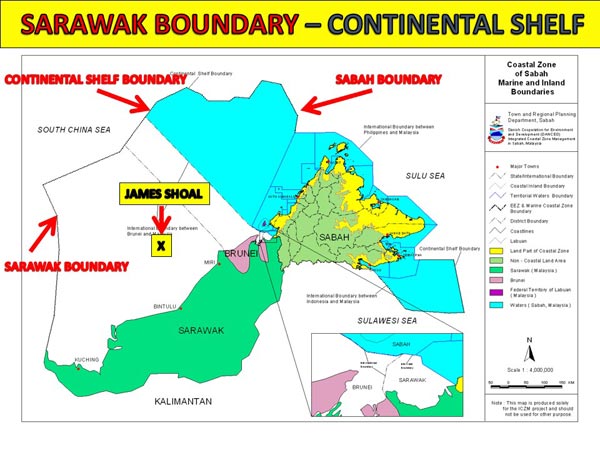 ‘X’ marks the location of the James Shoal, about 80 km off the coast of Sarawak. — Graphic courtesy of Jeffrey Kitingan

KUCHING: The ramifications of China’s claim and the recent incursion of its warships into the James Shoal, 80km off the coast of Sarawak, is too serious for Putrajaya to take lightly.

As the area is deep within the state’s territorial waters and its 200 nautical mile Exclusive Economic Zone (EEZ) the claim and the incursion is a direct threat to the sovereignty of the nation especially to Sarawak.

If a foreign power were to claim the James Shoal, the state’s territorial boundary could be shrunk to its shorelines and coastal waters, resulting in the loss of all its existing oil and gas resources.

This warning was sounded by State Reform Party (Star) Sabah chairman Datuk Dr Jeffrey Kitingan who urged the Federal Government to explain its inaction over the incursion into the nation and take appropriate action to protect its sovereignty.

“At stake are Sarawak’s security and sovereignty as well as the EEZ and exclusive rights and along with them, its fishing ground and tapping of marine resources, seabed mineral exploration including oil and gas exploration and other economic exploitation.

“It also has to be remembered that the boundaries of Sabah and Sarawak as declared by the Queen in Council in 1954 extends to the continental shelf which in most parts are beyond the EEZ,” he said in a statement yesterday.

Jeffery said the Defence Ministry must be prepared for all consequences for failing to treat seriously the Chinese navy’s incursion into the James Shoal.

If the Malaysian navy cannot even react when the Chinese naval ships were 80 km off Sarawak’s coastline, what would happen if a serious incursion were to take place, added the Bingkor assemblyman.

Jeffrey suggested the least the Malaysian government could have done was to position its submarines and other warships near James Shoal as a show of its naval power.

Chinese state news agency Xinhua recently reported that an amphibious landing craft and two destroyers patrolled the James Shoal and held a ceremony in which they swore to safeguard Chinese sovereignty.

He added that Malaysia and the United States had been informed of the exercises beforehand.

Malaysia protested to China in March last year against the incursion by four Chinese warships in the James Shoal, which lies about 1,800 km south of the Chinese mainland.

In April, a Chinese maritime surveillance ship returned to James Shoal which Beijing calls Zengmu Reef to leave behind steel markers to assert its claim.

China is laying claim on vast areas of the South China Sea which are also claimed by other countries including Vietnam and The Philippines.