Friday, August 7
You are at:Home»News»Sarawak»Routes Asia may hold the key 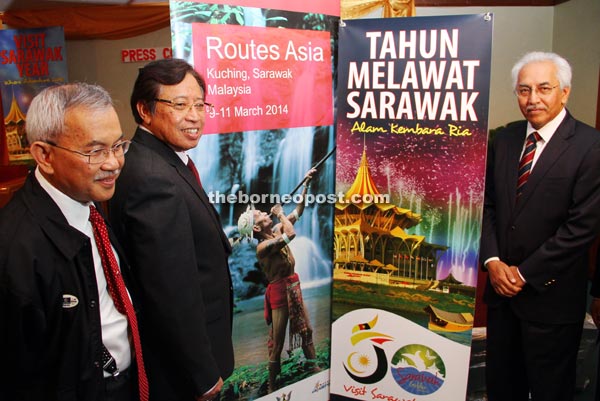 Abang Johari (centre) flanked by Talib (left) and Bashir unveiling the event posters after the media briefing in Kuching yesterday. — Photo by Chimon Upon

KUCHING: Sarawak is looking forward to next month’s Routes Asia with much anticipation as it may have the answer to the state’s perennial air connectivity problem that had impeded its tourism industry.

The 12th edition of the largest route development forum in Asia will he held here from March 9 to 11 and Tourism Minister Datuk Amar Abang Johari Tun Openg is confident the issue of flight connectivity would be raised.

“With our infrastructure, like airports, hotels and other facilities ready, we are now in a better position to expand our market abroad.

“Our only problem is lack of connectivity,” he said during a media briefing for Routes Asia here yesterday.

Abang Johari described Routes Asia, which will be held at the Borneo Convention Centre Kuching (BCCK), as a blessing because the presence of 350-odd delegates representing 92 airlines, 177 airports, 19 tourism organisations and 24 suppliers from almost 60 countries would certainly cast a strong international spotlight on the state.

It comes right after the successful Asean Tourism Forum 2014 that was held here recently.

“We should consider ourselves lucky and fortunate to have won the bid to host such an important event (Routes Asia).

“We believe Sarawak is one of the most untapped destinations for airlines and we are certain that route planners and revenue optimisers will discover this truth at Routes Asia,” he said, adding the state was thankful to MAHB for coming in as co-host of the event.

Meanwhile, Bashir echoed that Routes Asia would serve as an excellent opportunity for airlines to see for themselves the tremendous potential of Kuching as a leisure-travel destination and as a springboard into Borneo and beyond.

He pointed out that Routes Asia is the only conference for airlines and airports authorities to meet and discuss aviation related issues in Asia.