Friday, December 4
You are at:Home»News»Sarawak»Malaysia-China ties set to flourish further 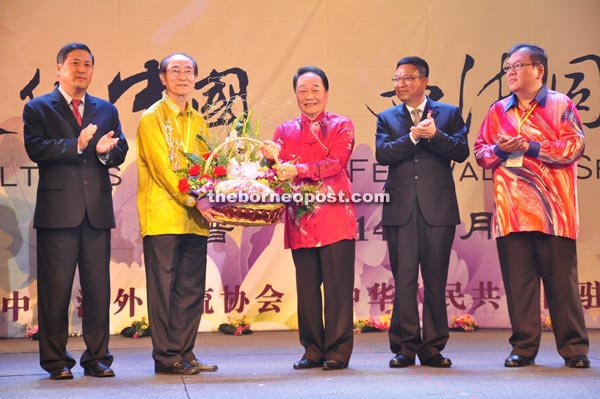 Lu (second left) hands over a basket of flowers to Wong as Liu (second right) and others look on.

KUCHING: Diplomatic relations between China and Malaysia is expected to be even better in the future based on how it had developed over the past 40 years.

Second Minister of Finance Dato Sri Wong Soon Koh said the relationship between both countries could be categorised under several stages.

The first stage covered the period when people from China migrated to Malaysia, went through many trials and tribulations, and triumphed.

“Our ancestors went through a difficult period to make what it is today in Sarawak and Malaysia for us, their descendents. It bears fruits now and it was how the relationship between Malaysia and China started in the beginning,” he said at the ‘Spring Festival Concert’ held at Borneo Convention Centre Kuching on Thursday.

“Malaysia was the first Southeast Asian country to take the bold step to establish diplomatic relationship with China (at that time), and that vision (by Abdul Razak), which is very ambitious, has put Malaysia’s name in the world today.”

Meanwhile, the Consulate General of the People’s Republic of China in Kuching, Liu Quan, who was also present, said the troupe wanted to celebrate Chinese New Year with the people of Sarawak and to promote culture exchanges.

The spectacle, from Feb 4 to 7, was jointly organised by Kuching Chinese Chamber of Commerce and Industry, Sarawak China Friendship Associations, and The Federation of Kuching and Samarahan Divisions Chinese Associations.