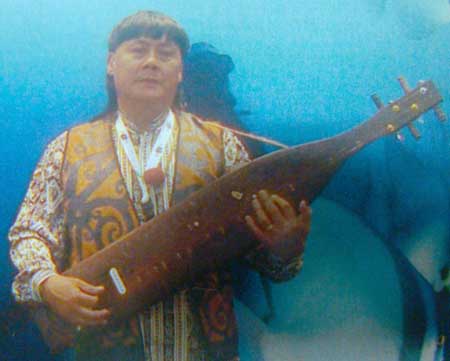 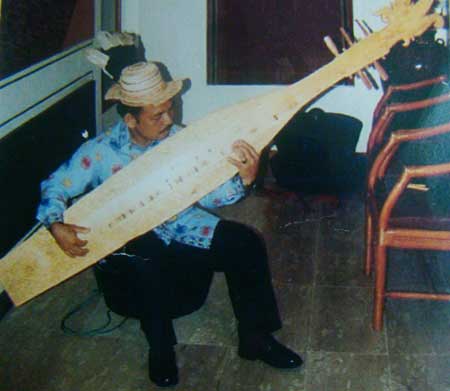 SAPEH, sape, sampet or sampeh, in whichever way it is spelt, this stringed instrument of Sarawak’s Orang Ulu is primordial in essence. When plucked and strummed, it eludes a haunting tune, so divine and sacred, that those who dance to its music convulse into a trance.

The home grown musical instrument of Central Borneo’s upriver folks was once played to lend music during ritualistic ceremonies in the aboriginal enclaves of the longhouse. However, over the wheels of time, the sapeh morphed in status and in its role.

Though electric sapehs deliver a rhapsodic repertoire for modern social occasions today, the musical wooden contraption that resembles a boat to some, and a mega bass ball bat to others, will always retain the lyrical quintessence of its indigenous pedigree.

Avid sapeh player Thomas Goh, who recently spoke to thesundaypost, says: “The sound of the sapeh will forever be lilting and esotericeven though it has undergone startling changes through a series of improvisation.”

According to Goh, a trainer and musician with the Kuching-based Dayak Cultural Foundation, sincethe last few decades, the sapeh had evolved tremendously.

“The original sapeh had rattan strings. From rattan strings, it was fitted with nylon strings and eventually it was donned with steel strings that give an enhanced twangto its sound,” Goh explains.

Goh, of Iban-Chinese descent, says the sapeh is relatively a simple instrument but its music is complex. It was originally a two-stringed instrument with only three frets. It was then solely used to induce a hypnotic trance during ceremonial rites, but in later years, it was remodelled to become a three, four, five or six stringed  instrument for the purpose of providing music for social entertainment and leisure, he notes.

Goh adds that the sapeh can produce different tones and notes, according to the way it is tuned and the number of strings and frets it has, and more importantly, in the specific way the frets are arranged.

He perceives the sapeh as a very “versatile and progressive” musical instrument because of the many phases of development it has undergone.

“I can use the sapeh to play ballads, hymns, folk songs, Yuletide melodies and gospel songs,” Goh says, adding, that he loves to play Amazing Grace on the sapeh as the song’s intense sentiments match with the sapeh’s distinctive tonality.

For Goh, his long relationship with the sapeh saw its “defining moment” when he brought theromantic sound of the sapeh to Hong Kong, where he gave a rendition of an old Mandarin love song on stage.

The mesmerising tune of Wang Shi Zi Nang Hui Wei which Goh plucked and strummed on the strings of the sapeh stilled his Chinese audience to rapt attention.

“I will always cherish that moment in Hong Kong. I was glad the sound of my sapeh found an engaging audience in a country more familiar with the mandolin,” Goh says.

He renders his Hong Kong debut as a “dedicated tribute” to the late Tusau Padan, the man who taught him how to play the sapeh, and whom he describes as a sapeh maestro.

“I was privileged to be a student of Tusau Padan. He had a passion for the sapeh and had always wished the sound of the sapeh would never lose its stately essence nor its crème de la crème as Sarawak’s distinguished musical heritage.

Goh who learned to play the sapeh when he was in his late twenties, also plays the serunai, gong and guitar but it is the sound of the sapeh which he likes most. Just as his mentor Tusau Padan, Goh is now sought after by people keen to learn to play the instrument.

“Some university students who have chosen to do research on Sarawak’s indigenous music have also sought my help. They were keen to know more about the sapeh to write a paper and also took sapeh lessons from me,” says Goh, who has had students from the University of Pennsylvania and even Harvard.

According to him, when playing the sapeh, the musician plucks one string to create the melody and the accompanying strings are used to render the rhythm usually heard in a cadence of drones.

He says the sapeh can be played as a solo instrument or in an ensemble of two, three or four with each group playing a pre-selected tone.

Another Sarawakian who has a close affinity with the sapeh is Henry Anyie. When met at his office at the Sarawak Council for Customs and Traditions, Henry was in a state of undiluted glee, ever ready to share his thoughts on the sapehwhich he described as the “top instrument” of the world.

Henry is more than just a sapeh enthusiast. He seems to be an authority on this quaint native lute. Apart from being a fervent sapeh player, he is also a sapeh craftsman. To date, hehas made not fewer than 300 sapehs.

Henry has also earned an entry into The Malaysia Guinness Book of Records as the man who has made the longest sapeh – a record six feet long and eight inches.

He says: “The sapeh has a mystical origin. A man whose wife was terminally ill was visited by a spirit in a dream. The spirit instructed him to play the sapeh in order to heal the sick woman. But nobody had heard of the sapeh and neither was one available then, so the man asked the spirit to teach him how to make the sapeh and the spirit willingly taught him.”

As the man plucked the strings of the sapeh, the spirit mystically guided him to play the instrument by instructing him to run his finger over the frets and pluck the main string in order to create the lead sound.

“As the man played the sapeh, the people around and the village shaman went into a trance and danced to his tune. This healing rite is called dayung. It is believed the sound of the sapeh was so soothing that it healed the woman on the sick bed. Since then, the sapeh was played by shamans to induce trance and healing in the longhouses,” Henry adds.

Unlike Goh, Henry learned to play the sapeh by himself.

“I just picked it up, fiddled with it and in no time, I was playing a tune.”

Although he himself is a sapeh virtuoso, the modest Henry credits Tusau Padan, Mathew Ngau and Ukung Mering as among the greatest sapeh players in Sarawak.

Henry also learned how to make the sapeh by himself. It is not difficult to make one, though it is time-consuming, he says.

It takes two weeks to complete the job which includes painting decorative motifs on the instrument. The motifs usually depict Sarawakian art and icons such as the hornbill and other tribal fare.

“All I need is a carving knife, an axe, a cutting knife, hammer, chisel and plane as well as paint and brush,” Henry says.

According to him, the sapeh is made from a single block of wood. Usually the merdang, meranti and arau wood is selected to make a sapeh but the best wood is the arau.

He says, a sapeh can have a maximum of 15 frets, adding that the way the frets are set will determine the character of its sound.

“The sapeh is hand-made, and that is another reason why it is such an extraordinary musical instrument. Every sapeh made is in itself a kind of first edition.Since it is hand-made, every sapeh has its own distinctive character and uniqueness,” he explains.

The sapeh continues to attract many people, and foreigners too are paying attention to this fabled instrument. Both Henry and Goh are confident the sapeh will never go out of circulation.

Goh is self-assured the sapeh will one day be embraced as an indispensable instrument by mainstream musicians in the country, if not around the world.

Henry says it would be good to teach sapeh music in schools in Sarawak, adding that as the sapeh is an icon of the state as much as the hornbill is, it can be taught as a form of art to primary and secondary school children.

For the sapeh, it has been a long odyssey since its debut at the bedside of a very ill native woman. It heals, it entertains.

For both, Goh and Henry, the microtonal sound of the sapeh is something to marvel at. It has the right notes to heal and the right tones to entertain. It is sacrosanct as it is secular.