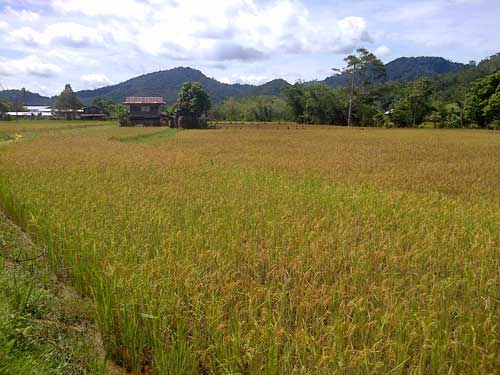 Rice ready to be harvested is seen in Bario. 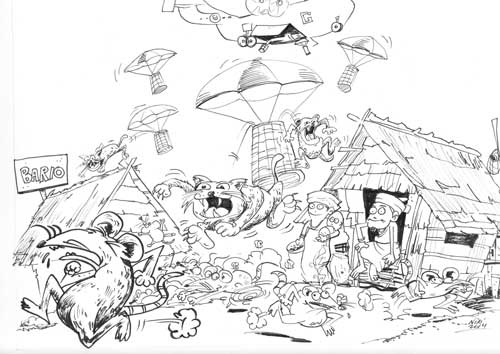 PROBABLY one of the most bizarre and unbelievable stories ever to come out of Sarawak was the report that the Royal Air Force parachuted cats into Bario in 1960.

The story begins with the attempt to eradicate malaria in the Kelabit Highlands.

A report in the Straits Times states that F LaChance, a World Health Organisation (WHO) entomologist was leaving Sarawak after successfully eradicating malaria. He had also sprayed houses in the “inaccessible Kelabitt (sic) Plateau”.

According to an article in the American Journal of Public Health, LaChance and his team would enter a longhouse and spray the insecticide DDT and/or BHC on the walls and under the beds of longhouses.

The residue would dry into white powder and remain effective for six months where the application would have to be applied again. It was felt this was enough to eradicate the mosquito carrying the malaria parasite plasmodium.

However, during a local malaria conference, the Kelabit community reported a  deterioration of the thatch on the roof of the longhouse. A team of WHO investigators was sent to investigate and found that a moth caterpillar population, which lived in the thatch, had exploded. They were literally consuming the roofs.

An investigation followed and it was found the DDT had affected a small chaclid wasp, which laid its eggs in the body of the caterpillar controlling the population.

Counts showed the caterpillar population had increased by 50 per cent. It was decided to spray the homes and roofs with a very toxic pesticide, which killed both the caterpillars and the wasps.

From around the world, including Sabah and Sarawak, reports flooded in about the die off of cats who licked their paws after walking across the roofs and rubbing their sides after the more potent spraying.

Villagers reported that the cats “would have the shakes, get sick, linger for a few days, and die”. Toxicology reports from the Center for Disease Control in Atlanta, USA confirmed the levels of insecticide in the cats’ systems were enough to cause the die off.

With the demise of the cats came the rats. A 1959 WHO Field Report informed the “field rats were a greater menace than usual, partly as a result of anti-malarial spraying which accidentally killed many cats”.

In his book ‘Fairland Sarawak’, Alastair Morrison reported that the popular and debonair district officer Malcom MacSporran was sleeping when a rat chewed through his pillow, apparently to remove the stuffing for a nest.

The bon vivant screamed out word that the town was being overrun by rats. John Seal, the assistant director of Civil Aviation in Kuching, received the call and another report stated the Kuching Fire Brigade was enlisted to round up cats to save the Bario rice crop from devastation.

MacSporran then enlisted an RAF plane to drop cats over Bario. Unfortunately, it was cloudy and the plane had to proceed to Jesselton (now Kota Kinabalu). The kind-hearted crew let the cats out for the night in a secure shed.

The plane took off the next morning after a battle to put the unwilling cats back into the wicker baskets. The plane was diverted to Brunei because the clouds had not dissipated.

Later the weather improved and the now bloody, scratched and testy crew parachuted the felines into Bario.

It is not known how many cats survived the drop or the condition of the man who opened the wicker baskets to let out the by then very angry cats.

Both the Straits Times and the Singapore Free Press of March 17, 1960 reported that 23 cats “expertly packed in wicker baskets” were airlifted and parachuted into Bario via an RAF Beverly Transport plane along with seven tons of other supplies.

They were engaged to help the Bario people to fight the rats, which had virtually destroyed the food supplies. The Straits Times report stated they were a gift “from the citizens of Kuching”.

Two years after the ‘parachuting cats’ incident, Rachel Carson’s ‘Silent Spring’ was published, kicking off the environmental movement. Many think Carson wrote the book after reading about the incident.

The United States banned DDT after testimony about the deaths of cats in Bario and other incidents. A worldwide ban of DDT was signed in 2001.

DDT has now been shown to cause breast and other cancers, male infertility, low birth rate, miscarriages and organ damage in humans. The facts are indisputable.

There is an organised attempt to bring DDT back to control malaria in Africa and Asia. Based on the ill effects of DDT, the global community must be vigilant against its return.

The Malaysian Nature Society
Established in the 1940, the Malaysian Nature Society is the oldest scientific and non-governmental organisation in Malaysia. Our mission is ‘to promote the study, appreciation, conservation and protection of Malaysia’s nature heritage’. Our 5,000-strong membership, spread across 12 branches nationwide, come from all walks of life, bound by a common interest in nature. For further information on membership or our activities in Kuching, call Kwan on 019-8349499. For information on our activities in Miri, call Nazeri Abghani on 085-453185. You can also visit www.mns.org.my or  http://mnskuching@blogspot.com.