Wednesday, February 1
You are at:Home»News»Sarawak»Jabu: Campaign against oil palm products ‘cruel’
For the freshest news, join The Borneo Post's Telegram Channel and The Borneo Post on Newswav. 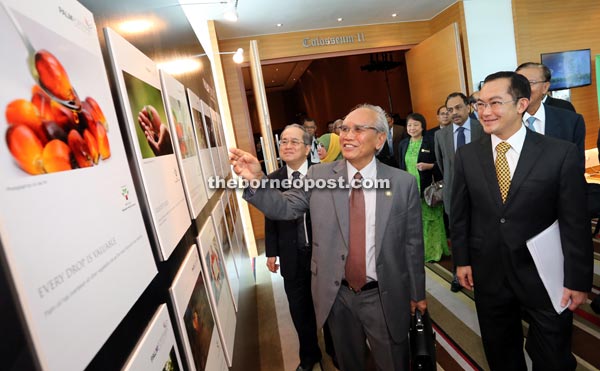 He labelled the campaigns mounted by these countries as “cruel” as it amounted to strangling the livelihood of hundreds of thousands of natives who live on peat land and secondary forests within their native customary rights (NCR) land.

“As minister-in-charge of rural development and modernisation of agriculture, I strongly condemn these blatant campaigns because they seriously stifle and deny all genuine efforts to develop peat land and NCR land, which is the main source of generating income for the poor native communities.

“We must not allow such cruel and bullying tactics to impoverish our native communities,” he said in his keynote address entitled ‘Poverty Eradication Through Land Development: The Salcra (Sarawak) Experience’ before launching a Malaysian Palm Oil Council (MPOC)’s seminar and dialogue here yesterday.

Jabu also dispelled allegations made by western non-governmental organisations (NGOs) that oil palm planting in the state had destroyed the Orang Utan habitat.

He pointed out that oil palm development in the state was outside the Orang Utan habitat and that there were wildlife sanctuaries and conservation areas for these primates.

On the Sarawak Land Consolidation and Rehabilitation Authority (Salcra), he said it was an effective agency directly involved in poverty eradication since its establishment in 1976.

He said Salcra’s main activity was to bring together NCR landowners to enable Salcra to turn their idle lands into commercial oil palm estates.

To date, Salcra has paid RM653 million worth of dividends to some 17,000 participants, who also enjoyed benefits such land titles, job opportunities, and also welfare, loan and study assistance, he stated.

Jabu also witnessed the launching of MPOC book `Back to Basics: Culinary Delights with Palm Oil’, which features recipes using palm oil by some of the world’s top chefs.

There was also a signing of an agreement between MPOC and Sarawak Forestry Corporation (SFC) for Orang Utan Conservation in the Sedilu-Ulu Sebuyau-Gunung Lesong and Maludam National Park Complex Programme.

Meanwhile, Uggah, told reporters after the function that his ministry and the Malaysian Palm Oil Board (MPOB) were working on a mechanism to ensure fair oil extraction rate (OER) for smallholders.

This initiative is meant to resolve conflict when smallholders sell their fresh fruit bunch (FFB) to the millers, with reference to an incident in Miri last year where some 100 oil palm planters protested in front of MPOB Batu Niah office demanding for a fair buying price.

“This is an issue the Ministry and MPOB are working out,” he said, adding that they would have a dialogue with the millers and planters soon.