Tuesday, February 7
You are at:Home»Sports»Football»Sarawak take on Felda tonight
For the freshest news, join The Borneo Post's Telegram Channel and The Borneo Post on Newswav. 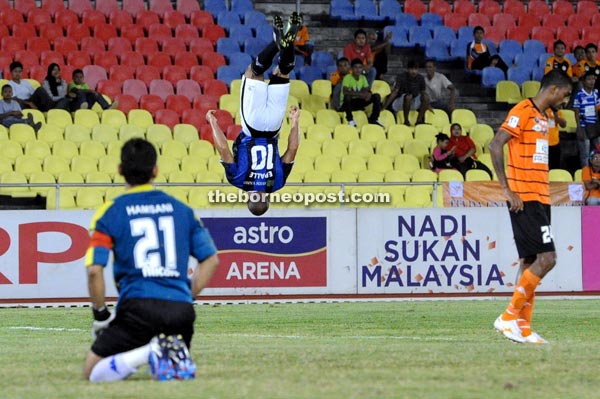 File photo of former Sarawak striker Joel Epalle celebrating after scoring against Felda United at the Hang Jebat Stadium in 2012. It was the last time that the two sides met. — Bernama Photo

KUCHING: Sarawak will be up against Felda United in their away first leg of the FA Cup quarter-final tonight.

The two teams have an interesting history in past clashes. Sarawak have a good record against the club side from Kuala Lumpur, winning four of their last five encounters.

The Crocs won 1-0 the last time they met at the Hang Jebat Stadium, Melaka in 2012 when both teams were playing in the Super League.

But it was Sarawak who were relegated to the Premier League at the end of the 2012 season while Felda United remained in the top tier.

The Crocs are back in the Super League this season while Felda United were relegated from it at the end of last season.

Sarawak enter tonight’s match riding on the crest of a three-match winning streak. They notched their last two wins while playing away. This will be their third match on the road, having spent over a week in Peninsular Malaysia.

Felda United’s performance so far this season is mixed. They have a win, a draw and a loss in the Premier League. But the team has fared well in the FA Cup competition. They defeated Harimau Muda C in the first round and Super League side Sime Darby FC in the second round both with a 1-0 scoreline. So they are certainly capable of springing a surprise.

The match at the Selayang Stadium kicks off at 8.45pm.