Wednesday, July 8
You are at:Home»News»Sarawak»Adenan, the Chosen One 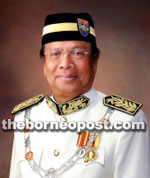 After meeting the Head of State Tun Datuk Patinggi Abang Muhammad Salahuddin at the Astana to hand in his resignation to the governor today, Taib announced that he had named Adenan as his successor to a packed press conference.

He also said that the Special Functions Minister in the Chief Minister’s Office was expected to be sworn in as the state’s fifth chief minister on Feb 28, the day Taib’s resignation takes effect.

No state in Malaysia has been in the limelight over the choice of its Chief Minister as much as Sarawak has over the last few years.

Adenan, 70, who was born in Kuching in 1944, once worked as a journalist and teacher before continuing his studies in law at the University of Adelaide, Australia.

His early education was at SRB St Joseph and SMB St Joseph, Kuching.

After graduating in 1970, he was appointed as a magistrate in Kuching.

His involvement in politics started in 1976 when he was appointed as legal advisor and a committee member of Parti Pesaka Bumiputera Bersatu (PBB) Sarawak.

In 1979, he contested and won twice, once in the by-election for the Muara Tuang constituency in January and again in the state election several months later for the same constituency.

He continued to defend the seat, winning every state election held subsequently.

He became an Assistant Minister in 1985.

In the 2004 general election, he also contested the Sadong parliamentary seat and beat the PAS candidate. Consequently, he was appointed to the federal cabinet as Minister of Natural Resources and Environment. He gave up the post to return to Sarawak.

Adenan was moved from the Muara Tuang constituency to Tanjung Datu in the 2006 state election which he won.

The Tanjung Datu assemblyman was appointed Special Advisor in the Chief Minister’s Office on April 2, 2010.

He was later appointed Minister with Special Functions on June 6, 2011. 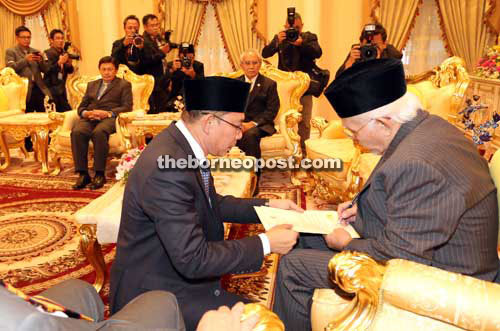 THE CLOSING CHAPTER: Taib signs the document held to him by Abdullah Saidol, chief political secretary to the Chief Minister. 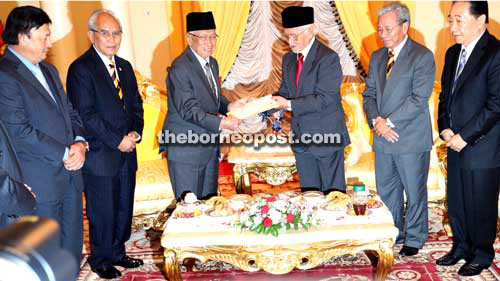 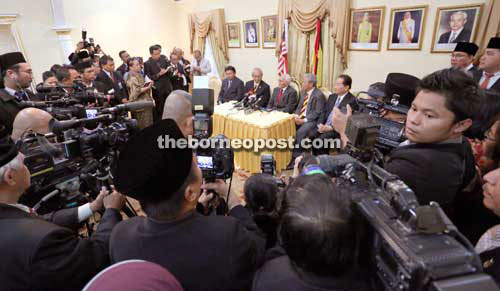 JAMMED PACKED: Taib making the announcement of his chosen one to a packed room of media personnel. 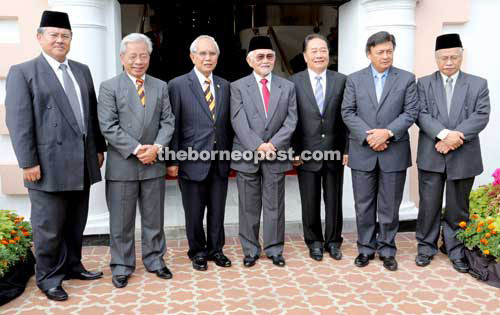 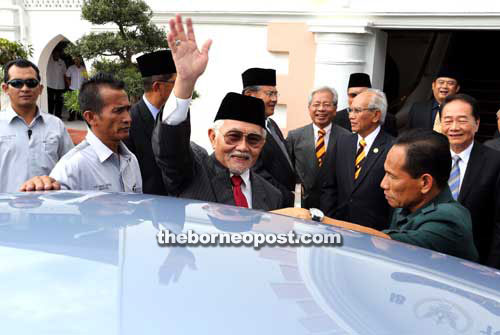 RELAXED AND IN HIGH SPIRITS: Taib waves to the crowd as he leaves the Astana after handing in his resignation and announcing the Chief Minister-in-waiting, ending years of speculation.