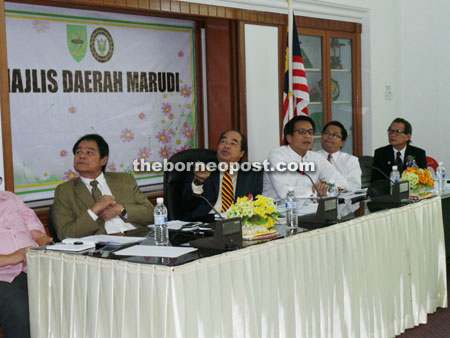 (From left) Anyi, Entri and Ngau at the Baram Regatta 2014 meeting in Marudi District Council.

MIRI: The upcoming Baram Regatta on August 22-23 this year will be a cultural fest depicting the end of the head-hunting rivalry in the Baram basin over a century ago.

As such, Assistant Minister of Public Utilities (Water Supply) and main committee organising chairman Datuk Sylvester Entri said he looked forward to Marudi Town coming alive with the convergence of all the indigenous tribes to this celebration of peace, culture and water sports prowess.

“We want to paint Marudi red with our rich cultural heritage with costumes, decorations and activities,” said Entri after a main committee meeting held at Marudi District Council recently.

He expressed happiness at the progress report from the respective sub-committees, which gave the organising committee confidence that this triennial event would be a big crowd puller and tourist attraction.

Among the new features in the regatta would be the ‘Pump Boat’ race, which proved to be a hit in smaller regattas in Long Lama last year.

Regatta sub-committee chairman and Telang Usan assemblyman Dennis Ngau said over 80 such boats were ready to participate in the event, an indication of the popularity of the race and the suitable river condition.

Pump boats are driven by water-pumps which are modified to become racing engines in specially made boats with a frog-like appearance.

The race would be an addition to the traditional paddling events and speedboat races which formed the backbone of the Baram Regatta.

The last Baram Regatta was held in 2011, with the Sultan of Brunei gracing the occasion on his historic visit to Marudi.

Also present at the meeting were Baram MP and former district officer Anyi Ngau and representatives of government departments and agencies.