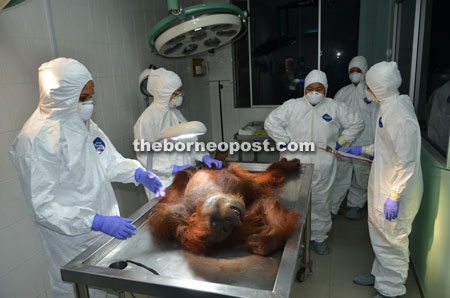 Dr Rosa Sipangkui, wildlife veterinarian of Sabah Wildlife Department, and her team performing the post-mortem on the male orangutan.

LAHAD DATU: In a landmark court decision, the Sessions Court on Wednesday sentenced two foreigners to a total of 48 months on two separate charges of hunting and causing griveous hurt to a 15-year-old male orangutan, which later died from its injuries.

Armil bin Gundil and Arcamsar bin Amil pleaded guilty before judge M. Rajalinggam of using a parang and slashing the orangutan and then tying it up with a nylon string  at Sahabat 3, Felda Sahabat, Tungku on January 29, 2014.

The two accused confessed their crimes when we questioned them. According to the them the reason why they wanted to kill the orang utan was that they wanted to take revenge, but according to eyewitness statements, the accused actually wanted to eat the orangutan, according to Sabah Wildlife Department prosecuting officer Karim Dakog.

Sabah Wildlife Department (SWD) assistant director and veterinarian Dr Sen Nathan said in a statement yesterday that based on the post-mortem finding it was obvious that the cause of death was malicious by nature.

“We confirmed that the injuries were caused by a parang, in fact one of the slash wounds nearly severed the right thumb of the orang utan,” added Sen.

“There were also a lot of bruises on the body indicating that the poor animal was also probably badly beaten. There was also a very severe haemorrhage in the brain,” he added.

Sabah Wildlife Department director Datuk Dr Laurentius Ambu said he had directed their enforcement team to investigate after receiving the information from Civil Defense personnel about the case.

“The two accused were immediately remanded for questioning. They were both charged under Section 25(3a) and 37 of the Sabah Wildlife Enactment 1997,” he said.

Ambu dispelled any thoughts and accusations by many overseas NGOs that Sabah does not prosecute wildlife offenders.

“We would like to thank the Department of Civil Defence, the police and the court for this unprecedented case. We appeal to the public to cooperate with SWD and report any criminal activity against wildlife,” he said.

Tourism, Culture and Environment Minister Datuk Masidi Manjun said they would use the full force of the law to protect the precious wildlife in Sabah.

“We will show no mercy to anyone causing any harm to our totally protected and endangered species.

“Sabah is blessed with some of God’s wonderful creatures and it is our moral duty to protect them,” said Masidi.