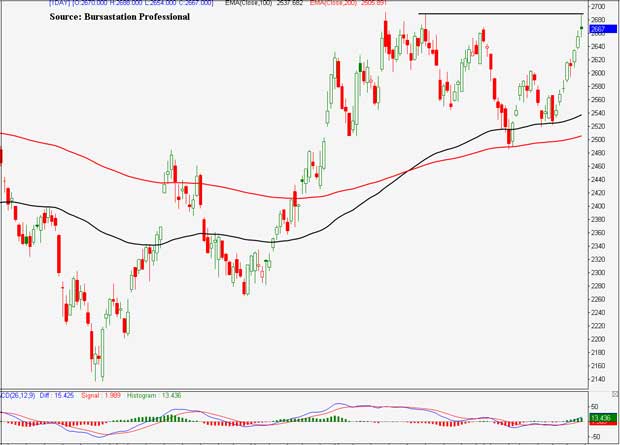 Malaysian palm oil futures rose 3.4 per cent for the week which extended Friday’s gain into a third session as rise in global vegetable oils’ prices boosted prices ahead of eagerly anticipated export data next week. The new benchmark futures crude palm oil (FCPO) April contract settled at RM2,665 per tonne on Friday which was up by 87 points from last Friday at RM2,578. The trading range for the week was from RM2,587 to RM2,688.

On Monday, Cargo surveyor Intertek Testing Services (ITS) reported that exports of Malaysian palm oil products from February 1 to 10 rose 4.1 per cent to 309,455 tonnes from 297,308 tonnes shipped during January 1 to 10.

Meanwhile, Cargo surveyor Societe Generale de Surveillance (SGS) reported that exports of Malaysian palm oil products for February 1 to 10 rose 8.4 per cent to 308,485 tonnes from 284,693 tonnes shipped during January 1 to 10.

Palm oil prices are expected to climb for a second straight year in 2014 due to strong demand from the biofuel industry which could reduce supplies and curb exports from top producers of the tropical oil.

HSBC analyst Thilan Wickramasinghe believed that unlike the past three years when big swings in supply impacted palm oil pricing the most, he believed that demand would take the lead in 2014.

According to analysts, the two countries which account for nearly all of the world’s palm oil supply, are geared for aggressive biodiesel programmes this year which could absorb up to 11 per cent of domestic output.

Indonesia had raised its minimum bio content in diesel to 10 per cent, while No.2 grower Malaysia is also looking to hike its requirements as it tries to cut down palm stocks and cushion prices amid growing competition from other edible oils.

Malaysia’s ringgit has strengthened throughout the week against the dollar due to bond inflows and solid Chinese January trade data earlier in the week. Federal Reserve chairwoman Janet Yellen also did not offer any surprises in her first congressional testimony where she would not make any abrupt changes to US’ monetary policy.

From the chart, price managed to break about our 2,605 level and it went to up as high as 2,688 which is near to one of the resistance targets.

Currently, we drew the resistance line and believe that the market is in a bullish momentum in the coming weeks.

We also drew moving average 100-day (black) and 200-day (red) to show how the bullish momentum had built up over the weeks. Another good insight to take note that is that the daily candlestick on January 13, 2014 (low at 2,486) touched the 200 day moving average but was unable to break even lower than that.