Tuesday, February 7
You are at:Home»Business»TPPA will enable Malaysia to tap into new markets — Asli
For the freshest news, join The Borneo Post's Telegram Channel and The Borneo Post on Newswav. 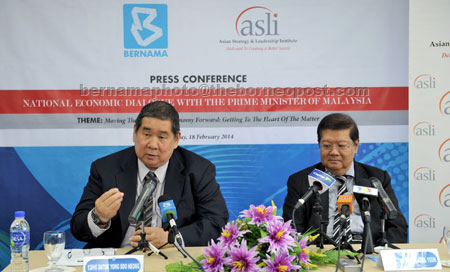 Yong (left) with Yeoh during Bernama And Asli Joint Press Conference on the ‘National Economic Summit and Dialogue with the Prime Minister Of Malaysia’ at Wisma Bernama here yesterday. — Bernama photo

“The TPPA enables us to get into new markets that are beyond our existing free-trade agreement (FTA), such as the US, which presents enormous opportunities,” he told a press conference here yesterday.

Yeoh said it was essential for the country to be involved in the early stages of the talks with all the other countries for the deal.

“If we are not there, once the TPPA is done and agreed by all the other countries, we will have to adhere to the conditions that were agreed by them and our concerns will not be articulated.

“Among the issues that the Ministry of International Trade and Industry is addressing include the government procurement because we need to protect the interests of Bumiputera entrepreneurs, as well as, the investor-state dispute settlement, which allows a small and private company to sue the governments of the TPP countries,” he said.

On inflation, he said, it would moderately creep up this year due to the increase in prices as a result of subsidy rationalisations.

However, the concern would be more on the inflation for next year, upon the implementation of the goods and services tax, he said.

“In many countries where the tax was first introduced, the economic studies have shown a 2-3 per cent increase in inflation during the first year of implementation.

“However, the significant impact will only be during the first year and the study shows that things will settle down after that,” Yeoh said.

Asli yesterday held a joint press conference with the Malaysian National News Agency (Bernama) on the National Economic Summit and Dialogue, to be held on March 7 at Sheraton Imperial Hotel here.