Sunday, May 16
You are at:Home»News»Sarawak»‘Technology must relate to society’ 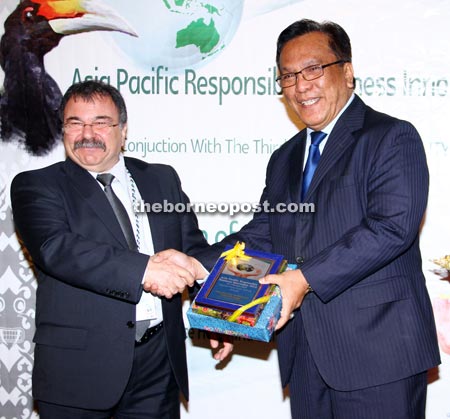 KUCHING: Technology should be built with the 3As in mind – accessible, affordable and appropriate – in order for it to be useful to society.

This was pointed out by Universiti Malaysia Sarawak (Unimas) vice chancellor Prof Dr Mohamad Kudim Suaidi, who said it was also the government’s requirement.

“There is no point in having technology that is a misfit and not giving benefit to us,” he told a press conference after officially opening the First Asia Pacific Responsible Innovative Workshop here yesterday.

According to him, the 3A concept is crucial in the university’s research work.

The workshop was organised by Unimas Responsibility Research Team in collaboration with their strategic partners from Europe and South America in Responsibility and Research Innovation (RRI) consortium.

“It is the first time we bring this workshop to Sarawak in particular Unimas,” he said of the two-day workshop.

Dr Rohaya Mohd Nor from the Business Faculty of Unimas is the head of the Responsibility Team in Unimas and the chairperson of the workshop.

Meanwhile at the press conference, Rohaya revealed that RRI consortium is a concept already accepted in Europe.

“As network researcher for Unimas and other universities, we are accepted in the network and we are invited to the consortium once we submit our proposal.”

Rohaya explained that Unimas is seen as important from the aspect of RRI in areas that need to be explored such as halal products.

“If we are to start with the supply chain, we start at the halal concept from the mind of the scientist,” she explained.

“We are proud to collaborate with Unimas in certain emerging fields,” she added.

On RRI, Tavlaki said the idea and concept behind it emerged from society itself – as many technologies were developing very fast and not easy to absorb but which every society was keen to follow.

“So the idea is to have this new technology and innovation to evolve with society. Meaning technology has to be with the society and for the society,” she stressed.

“And the work has started to be complicated and we cannot work as individuals or countries alone,” she added.

The co-ordinator for Responsibility Project Dr Zaharya Menevidis said from the engineering view, RRI is not only for Europe but for the whole world.

“When we talk about responsibility we know about the idea and learn from others.

“We then know the common definition and understanding among us. So this is what we hope from the workshop,” he said.