Saturday, October 1
You are at:Home»Business»YPF signs MoU with Petronas to develop shale oil in Vaca Muerta 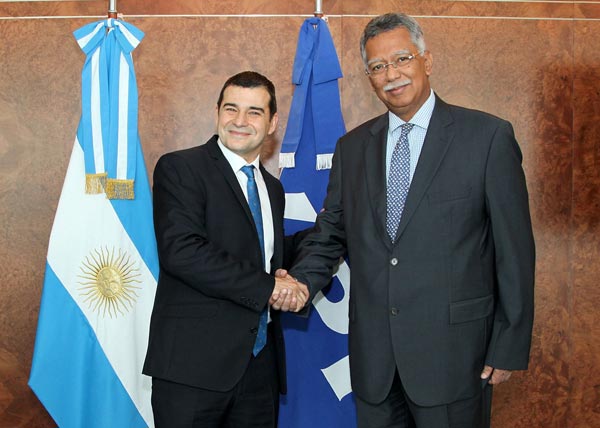 YPF SA and Petroliam Nasional Bhd (Petronas), state-controlled companies from Argentina and Malaysia, said they signed a memorandum of understanding to jointly develop shale oil at the world’s fourth-largest deposit in Vaca Muerta.

Miguel Galuccio and Datuk Shamsul Azhar Abbas, chief executive officers for YPF and Petronas, respectively, signed the preliminary deal to develop a 187-square kilometre area (72 square miles) at YPF’s Buenos Aires headquarters yesterday, the Argentine producer said in an emailed statement. Technicians from both companies will meet to study the agreement’s feasibility and later could negotiate a possible development accord, YPF said.

YPF is seeking shale partners to develop Vaca Muerta, an areas the size of Belgium that contains at least 23 billion barrels of oil. Chevron Corp, the third-largest oil company by market value, signed an MOU with YPF in August 2012 that 11 months later became a development accord. Chevron initially agreed to invest as much as US$1.24 billion in a pilot program that could be expanded to a long-term investment of $16US billion.

“The meeting with Petronas allows us to move forward in adding a new partner to develop Vaca Muerta in line with our strategic plan,” Galuccio said in the statement.

“It is also in line with our philosophy of getting partnerships to take advantage of our vast shale oil and gas resources.”

The accord is very advanced with remaining points centered on legal definitions, Infobae said. The compensation deal probably will be closed in March, it reported.

The Argentine government reached a preliminary agreement with Madrid-based Repsol on Nov 25 to compensate the company for the 51 percent stake in held in YPF. The two sides are negotiating a final resolution of the dispute. — Bloomberg