Saturday, February 29
You are at:Home»News»Sarawak»Nicholas feeling at home with slimy, exotic creatures 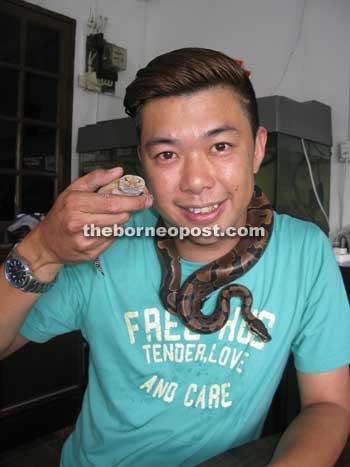 Ong with his exotic companions – a python and a gecko.

KUCHING: When we think of pets, we usually think of adorable cats, dogs, and probably rabbits.

Rarely would we picture having cold, slimy creatures such as snakes, spiders and lizards for a buddy.

But for self employed Nicholas Ong, 33, he loves them just the same, and his collection includes snakes, tarantulas, geckos and lizards.

Making ‘friends’ with weird animals merely requires understanding them, he said as a matter-of-factly.

His love for exotic pets began when he was 16 years old. Initially, his family was against his unique hobby, but over time they accepted it after realising his passion and perseverance for exotic creatures.

Among the snake species he keeps are python, viper, racers, cobras and cat snake. They are all housed in vivariums.

He bought some of the snakes from licensed dealers, others he captured himself.

“I have caught a lot of snakes. During my free time on weekends, I would go out with friends to the outskirts of the city in search of snakes.

“Over the years, I did buy a few. For instance, I bought a Clown Morph Ball python from a dealer from Johor for RM8,000,” he said when met at his residence in Batu Lintang yesterday.

Ong said those he bought were of the captive bred, meaning people breed them for sale.

“The price of imported ones varies. Its price range from a few hundred to a few thousand ringgits.”

Ong lamented that people usually paint snakes as something dangerous and venomous, when in reality they are lovely and interesting.

“They only attack when they feel threatened. We need to understand them. Of course there are snakes that are dangerous, but a lot of local ones are shy and tend to hide from humans.”

Over the years, Ong learned how to handle snakes well. He picked up the skills on handling techniques from reading lots of books and viewing online videos.

He said keeping snakes as pets are easy, but they should always be treated with care and respect.

They only eat twice a week, and sometimes could go two months without food. Their food ranges from frogs, mice, lizards to birds.

“But it is not advisable to feed them with house rats as it could result in fatal diseases.”

Humans are, of course, not on the food list of pythons, he smiled.

“But snakes as man-eaters are not impossible, especially if it is an enormous snake,” he said, adding that most human fatalities were from snake bites.

When asked if snakes, like dogs and cats, had the ability to recognise their keepers, Ong replied, “I wouldn’t say they can recognise or not. It is more towards whether they are used to be touched by humans or not. Once they are used to it, they can become tame.

“If they are not used to it, they would be nervous or fidgety.”

Ong said his friends used to ask him if his snakes were poisonous and he would explain to them that they are not.

“If a person eats a snake and the person dies, that is a poisonous snake. If a snake bites a person and death occurs, that snake is venomous. I would not recommend anyone to keep venomous snakes as it needs professional handling.”