Saturday, August 8
You are at:Home»Features»Trip down memory lane to Batang Ai 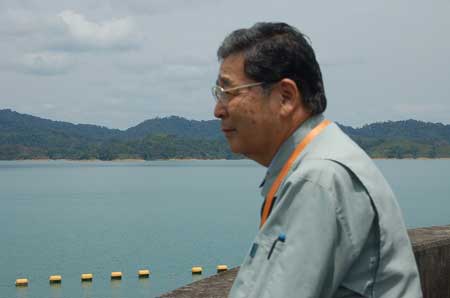 Fujii scanning the water from the top of the Batang Ai dam wall reminiscing his days as project manager of the diversion tunnel construction. 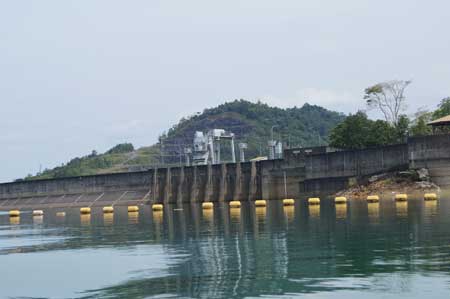 The Batang Ai dam at the water intake point.

ON Feb 18, Tetsuo Fujii, a civil engineer from Osaka, took an emotional trip down memory lane to Batang Ai.

It was arranged by Sarawak Energy Berhad (SEB) for him to visit the hydro electric dam there.

Fujii, now 80 years old, played a key role in the construction of the Batang Ai dam. In 1981, he headed the team that built the diversion tunnel as the project manager of Okamura Corporation, the contractor for the first phase of the dam construction.

It was the beginning of his love affair with the Land of Hornbills that lasts until today.

After finishing the tunnel diversion, Fujii stayed on as the general manager of the joint venture company — Okamura and Maeda — in charge of phase two of the project.

He left Sarawak in 1987 after completing the dam to take up other contracts in Japan but his heart remains in the land that has become as much home to him as the place where he was born.

The challenges of his next job as project manager for the construction of the 38km bridge from Honshu to Shikoku Island kept him away from Sarawak. 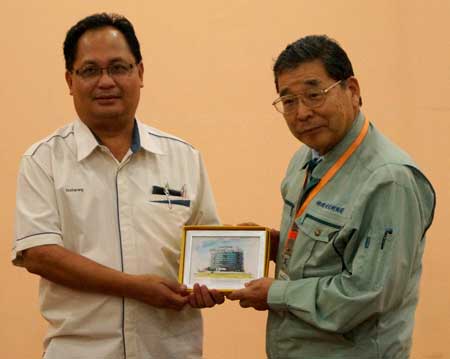 Encharang (right) presenting a memento to Fujii to mark his visit to the hydro electric dam he helped to build. 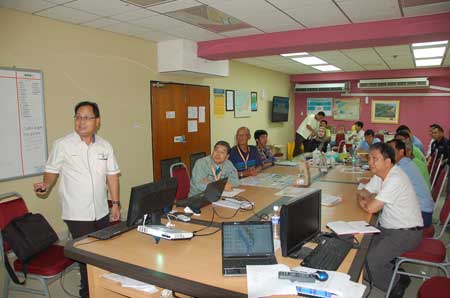 Encharang (left) giving a briefing on the operation of the Batang Ai dam to Fujii (seated left) and other visitors.

Later, after landing a job as civil works manager with the Kobe City Council, he managed to find time to return to Sarawak. Thereafter, he made regular visits – even after his retirement.

On several occasions, he visited Batang Ai privately just see how the dam, which he helped to build, had fared over the years but never had a chance for a comprehensive visit and to be briefed by SEB officers.

On his way to power station last Tuesday (Feb 18), Fujii recognised several landmarks along the road. He was very impressed with the progress of the towns and villages along the road, especially the modern longhouses.

He also remembers the big tapang tree by the roadside after passing through Serian town.

“That was the tree we always looked out for to and from Batang Ai because it told us we were leaving Kuching or were near the city.”

He also remembers he and his Japanese colleagues called Bukit Bengunan,about half way to Batang Ai, the Weeping Hill as it was there that they started to miss the good times they had in Kuching during their break.

Upon arriving at the power station, Fujii was briefed by the station manager Encharang Ngtingih on the operation and condition of the dam.

He was gratified to learn that the structure of the dam was still in very good condition and some parts of the walls and panels were still in their original paint.

Looking back, Fujii remembers the challenges he and his team had faced in constructing the tunnel.

One of the biggest hurdles was logistic as the road to the dam site back then was in poor condition and the wooden bridges approaching the site could not hold the weight of the heavy machinery brought in for the construction.

“After much discussion, we finally solved the problem by diverting a road to under the bridge and driving over the stream which fortunately was shallow,” he recalled.

Another challenge was the weather and the soil condition at the dam site.

“In Japan, we do not have such heavy rainfall, so we did not take into account the slippery condition of the roads at the site when it rained.”

They solved the problem by dumping sand and gravels from the river on the muddy roads.

One major headache for the contractor was the demand by the workers for higher pay. This seemed to be compounded by the fact at that time, Bintulu was just beginning to open up and it needed more workers.

As a result, many of Batang Ai workers left for Bintulu as the pay there was higher. Those who stayed behind staged a protest, demanding for higher pay.

To negotiate with the striking workers, the management solicited the help of the local community leader Pemanca Manau (the name Fujii remembers him by).

“He called me anak as he is much older than I. Through his advice and mediation, we managed to solve the dispute and resume work,” Fujii recapped.

On why he became so attached to Sarawak, he said he was touched by the friendliness of the local people and he feels very much at home with them.

“I am especially touched by how they responded when I thanked them. They said sama sama – the same way the Japanese respond to Arigato which is Do i tashima shite”

He also noted that when he said goodbye to the people in Batang Ai, they replied jumpa lagi which is the same response in Japan where the people say mata dozo to sayonara.

To help establish better relationship between the people in Sarawak and Japan, Fujii set up the Sarawak-Japan Friendship Club about 10 years ago.

He has set himself the mission to help the people here as much as he can as he often says Sarawak is my second home.