Friday, December 3
You are at:Home»World»Girl killed as fears heighten over Thai violence 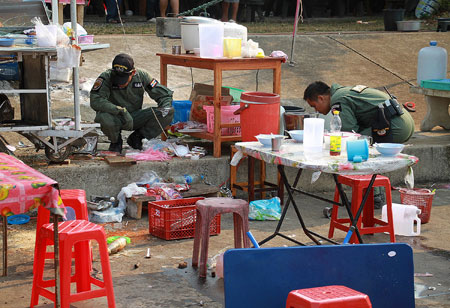 Members of a bomb squad unit inspect the site of an attack near an anti-government rally in Khao Saming, Trat province. — AFP photo

BANGKOK: A five-year-old girl was killed and 30 people wounded in a drive-by shooting attack on an anti-government rally in eastern Thailand, police said yesterday.

In the latest outbreak of political violence in the deeply polarised nation, gunmen in two pick-up trucks opened fire Saturday night at a rally in a packed marketplace.

“A five-year old girl was shot and died later while 30 other people were injured,” said local police lieutenant Thanaphum Naewani.

He said the shooting in Khao Saming district of Trat province, 300 kilometres east of the capital, was believed to be politically motivated.

Another five-year-old girl was among six people in critical condition after the shooting, Supan Srithamma, head of Thailand’s Department of Medical Services, told AFP yesterday.

Months of rallies aimed at toppling Prime Minister Yingluck Shinawatra have been marred by sporadic gun and grenade attacks – mainly in Bangkok – by unknown assailants.

The violence has fuelled fears of more widespread unrest in the kingdom, which has suffered bitter political divisions since a military coup ousted Yingluck’s older brother Thaksin Shinawatra as prime minister in 2006.

Hours after the attack leaders of the pro-government ‘Red Shirt’ movement met in Nakhon Ratchasima, the gateway to the Shinawatra-allied northeast, to discuss ways to bolster Yingluck’s crisis-hit administration.

The anti-government movement condemned the attack, blaming authorities for failing to protect rally-goers.

“Weapons of war were used in an act of planned and organised terror,” protest spokesman Akanat Promphan told AFP.

“This atrocity has worsened the severity of the violence against innocent protesters … it is a matter of national security,” he said, urging authorities to swiftly track down the attackers.

Both sides have traded blame for sparking previous clashes, including a gunbattle between police and protesters in Bangkok’s historic heart last week which left five people dead – including a policeman – and dozens wounded.

Seventeen people have been killed, both protesters and policemen, and hundreds injured in clashes and attacks linked to demonstrations.

Most of the recent violence has taken place in or around Bangkok, where opposition protesters are carrying out a self-styled “shutdown” of several key intersections across the city, although in dwindling numbers.

Yingluck’s besieged government last week suffered another blow when a court banned it from using force against peaceful demonstrators, severely cramping its powers to handle the protests and mounting violence.

In addition to the street protests, the embattled premier is also under intense pressure from a series of other legal challenges.

She faces charges of neglect of duty over a controversial rice subsidy scheme that could see her removed from office.

Protesters accuse Yingluck’s billionaire family of using taxpayers’ money to buy the loyalty of rural voters through populist policies such as the rice scheme.

They are demanding she steps down to make way for a temporary unelected council that would oversee loosely defined reforms to tackle corruption and alleged vote-buying. — AFP