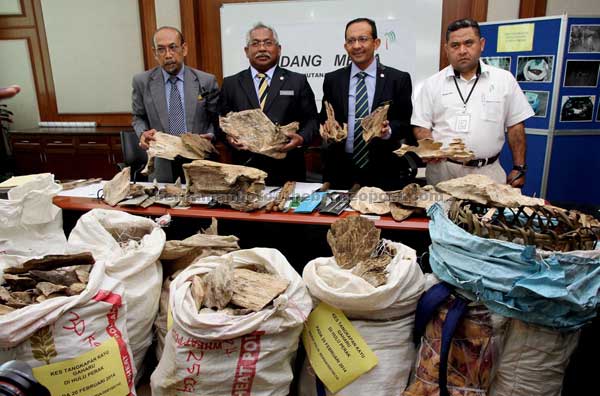 He said one more foreigner was caught at 4.30pm in the operation by UPP and Perak Wildlife Department at the East-West Highway.

He said seven more people were detained later at 8.30pm at the same place with the cooperation of the Wildlife Department, Perak National Park, Royal Belum Park and the World Wildlife Fund (WWF).

“Their actvities were detected by cameras of WWF which were installed to monitor animal movements in the area,” he said.

He said the suspects aged between 25 and 35 years were being invetsigated  under Section 68 and Section 84 for the National Forestry Act 1984 which carries a maximum fine of RM50,000 or jail not more than five years or both upon conviction.

Roslan said raw gaharu wood could be sold at between RM1,000 to RM8,000 according to the quality.

He said the three cases were the success of the National Blue Ocean Strategy and the 1NRE Enforcement Team between the Perak Forestry Department and various enforcement agencies.

He called on members of public with information on such activities to alert the Forestry Department or police to eradicate such thefts. — Bernama