Monday, February 6
You are at:Home»News»Sabah»108 illegals rounded up in Inanam, Menggatal
For the freshest news, join The Borneo Post's Telegram Channel and The Borneo Post on Newswav. 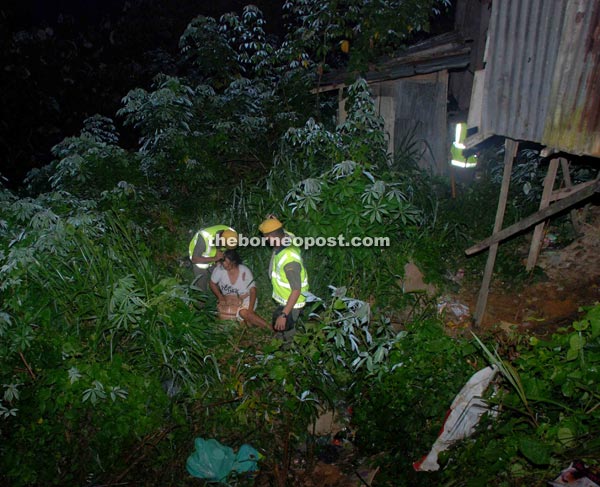 Enforcement personnel attending to the elderly woman who jumped 20 meters down from a window at her home.

KOTA KINABALU: An elderly woman illegal immigrant was injured when she jumped 20 meters down from a window in a desperate attempt to avoid being arrested by Immigration enforcement personnel during a raid here early yesterday morning.

The woman, in her 50s, jumped from the window of her wooden house that was built at the edge of a small hill, together with her eldest son, when enforcement personnel stormed into a squatter area at Kampung Kionsom, Inanam at around 3.50 am yesterday.

She fortunately only sustained minor leg and body injuries, and was immediately apprehended by the enforcement personnel. Her eldest son, however, managed to escape.

The woman, believed to be a single mother of four children, were among 108 illegal immigrants, including 59 children, detained by enforcement personnel during two separate raids at Kg. Kembirian, Menggatal and Kg. Kionsom, Inanam.

Sabah Immigration Department deputy director (operational chief), Saidi Hj Mohd Said, said, during the two and a half hours operations, a total of 189 people, aged between 14 days old to 70 years, were rounded up for documentation inspection.

“From the figures, 98 Philippine nationals comprising 19 men, 25 women and 54 children, and 10 Indonesians (three men, two women and five children) were detained for failure to provide any documents to be in the country,” he said yesterday.

Saidi said the purpose of the joint operation, together with the People’s Volunteer Corps (RELA) was to flush out illegal immigrants around the state capital.

He said those detained would be taken temporarily to detention centres to be investigated under Section 6(1) (c) of the Immigration Act 1959/1963.

Similar operations would be carried out from time to time and he thanked the public for their continuous cooperation with the department.