Sunday, February 5
You are at:Home»News»Sabah»New hairdo for Unduk Ngadau contestants
For the freshest news, join The Borneo Post's Telegram Channel and The Borneo Post on Newswav. 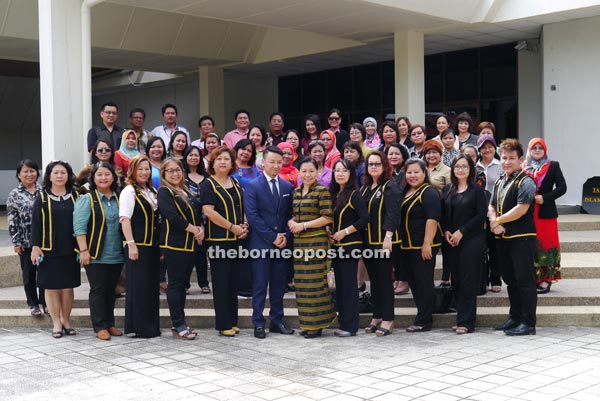 Joanna (sixth right) with the organising committee members, and organising chairpersons and representatives of various districts at the State Museum yesterday.

KOTA KINABALU: Johor’s participation of the State-level Unduk Ngadau competition will be among the things that the organising committee hope could make this year’s event different from previous years.

Organising chairperson Joanna Kitingan said that after decades of Unduk Ngadau competitions, changes are needed to suit the changing times.

Among other things, the ‘gong’ hairdo, which has been synonymous with the traditional cultural beauty pageant, should be deemed obsolete and be replaced with simpler and modern hairdo.

“When it comes to the hairdo, we want it to be simple and elegant to show the simplicity, elegance and beauty of a modern Kadazandusun Murut lass,” said Joanna.

“The traditional ‘gong’ hairdo no longer applies as it was a habit which started somewhere in the late 70’s and 80’s and has nothing to do with culture. It was simply the trending hairdo at that time which somehow became a repeated habit and therefore made a tradition.

“The actual criteria were simply to do the hair up for an elegant look. But over the years, some seem to have gotten carried away with the size of the ‘gong’ and the hair accessories,” she added.

Joanna was speaking to reporters after chairing a briefing session with the organising chairpersons and representatives of all 47 districts on this year’s State-level Unduk Ngadau competition rules and regulations, held at the State Museum, here yesterday.

Other than these, ‘attitude’ will also be added to the list of the State-level Unduk Ngadau’s judging criteria, which will make up 10 per cent of the contestants’ score sheet, said Joanna.

Joanna also disclosed that despite some differing opinions, the organising committee have decided a long time ago that the traditional attire that each state-level finalist chooses to present in the competition should be that of the district they represent, to portray Sabah’s diverse ethnic backgrounds.

“We understand that many of the districts consist of more than one ethnic group. However, we strongly feel that each district should represent the majority ethnic group of that district so that when they reach the state level, people can see the numerous ethnic groups that we have in Sabah, portrayed through the finalists’ choice of traditional costume.

“For example in Kota Marudu, we have the Dusun Kimaragang ethnic group which we don’t have in other areas, why not represent that ethnic group at the state level?” said Joanna.

“Some argue that it is a cultural competition and should not be likened to other beauty pageants. But the rule to disallow Muslims is outlined because we do not want to raise any issues with the Islamic authoritative bodies. We don’t want things like having winners’ titles being revoked due to their religion and things like that.”

However, said Joanna, nothing is yet set in stone when it comes to the issue and “we open the matter for discussion among committee members. Currently, Muslim ladies who want to join the competition need to get clarification from their district’s Islamic authoritative bodies and most importantly their parents.”