Saturday, June 6
You are at:Home»News»Sarawak»Sarawak to maintain its 60 pct forest cover — Awang Tengah 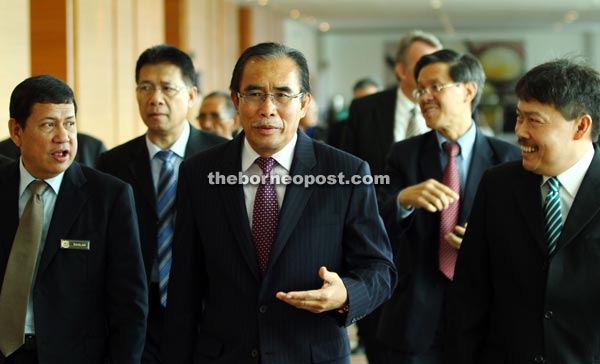 Len Talif (centre) together with Ramlan (left), Kennedy (right), Julaihi and others walk to the conference room. — Photo by Chimon Upon

KUCHING: The state government has set a target of 25 per cent of its 12.4 million hectares’ land mass for various agricultural purposes.

This will still allow the state to maintain a 60 per cent forest cover, which is higher than the world average, says Second Minister of Resource Planning and Environment Datuk Amar Awang Tengah Ali Hassan.

“Sarawak fully acknowledges the importance of its peat lands not only as part of the carbon sink but more so for the survival of the local communities who live along the coastal peat land areas,” he told a lunch talk held in conjunction with the 8th Malaysia Heads of Mission Conference here yesterday.

His text of speech was read by Assistant Minister of Environment Datu Len Talif Salleh.

While the Netherlands and Denmark burn their peat for power generation, the state government had adopted a wise use approach and not merely clear-felling as depicted by certain non-governmental organisations (NGOs).

The government would make sure oil palm development would not jeopardise the environmental integrity of the areas being cultivated.

The state’s major peat lands initiatives included a feasibility study under the Integrated Coastal Zone Management done in 1998, development and implementation of a Guideline on Water Catchment for Agriculture in Coastal Peat land areas of Sarawak and gazetting of biodiversity conservation areas within the peat lands and water catchment areas.

“Western NGOs have accused Sarawak on issues such as deforestation of its peat swamp forests, decimination of orang utans and a major contributor of carbon dioxide global emission.

Awang Tengah said Indonesia and Malaysia produced about 85 per cent of the world’s palm oil, making it a multi-billion dollar industry in both countries.

Malaysian palm oil accounted for 24.1 per cent or 17.6 million tonnes of the total global trade of oils and fats in 2011.

“Palm oil is one of the 17 major oils and fats produced globally and palm oil was the highest consumed oil in 2012, reaching three billion people in 150 countries.

“Global consumption of palm oil was 52.1 million tonnes in 2012. Palm oil is competitively priced against soybean, rapeseed and sunflower oil in the world’s market for oils and fats.”

Among reasons for palm oil’s widespread use was also the fact that it is the most efficient oilseed crop in the world.

According to the Oil World Report 2013, one hectare of oil palm plantation was able to produce up to 10 times more oil than other leading oilseed crops.

Hence on a per hectare basis, oil palms produced roughly 10 times as much vegetable as soybean.

“Also, contrary to NGOs claims that millions of hectares of rainforests are felled annually for oil palm, the fact is that Malaysia’s oil palm area stands at five million hectares, an increase of only 4.36 million in the last 35 years. Sarawak has 1.2 million hectares.”

He thus hoped delegates to the conference could assist Sarawak to address the misconception on issues portrayed by foreign NGOs.

“We have also distributed booklets on Sarawak’s Sustainable Forest Management and Biodiversity Conservation which will provide you further with better insight on the management of our peat and forest resources.”