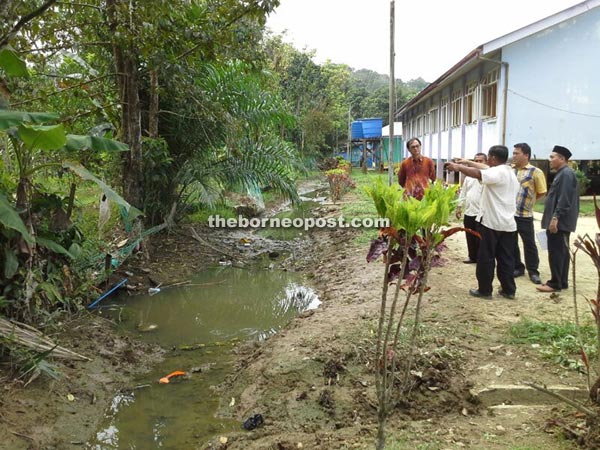 Baru (left) being briefed by the teachers about the flood problem at SK Siang-Siang. 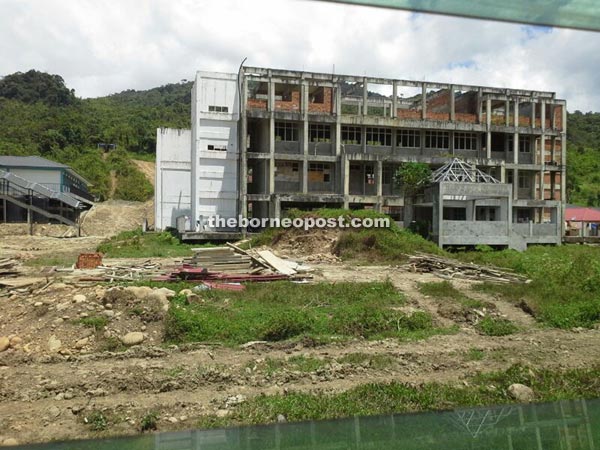 The construction of SK Long Sukang new building is abandoned due to the contractor’s financial problem.

KUCHING: The Education Ministry is urged to seriously look into all the problems faced by rural schools in the state, especially with the RM1 billion allocated by Deputy Prime Minister Tan Sri Muhyiddin Yassin recently.

Ba Kelalan assemblyman Baru Bian said The Borneo Post’s revelation yesterday on the lack of clean water supply and poorly built teachers’ quarters at SMK Tinjar in Lapok, was proof that many rural schools in the state were in ‘pathetic’ condition and in need of urgent action from the ministry.

“It’s shocking and schools in areas like Baram, Limbang and Lawas that we have pointed out are the ones that we know. You can imagine the conditions of schools in other districts throughout Sarawak.

“I urge all schools to raise their problems and request for budget, especially when you have the RM1 billion-allocation,” Baru, who is also, state PKR chairman, told a press conference here yesterday.

He said the shocking situation of rural schools was also reflected in SK Long Luping, SK Long Sukang and SK Siang-Siang, all in Lawas, which he visited recently. Each was facing different problems that affect the conduciveness of the schools in educating the younger generation.

“SK Long Luping is one of the new schools. The school building and teachers’ quarters were completed a few years ago. The shocking thing is that this school was built without water supply included in the plan.”

Baru said he was told that after the school was built, there was an allocation of RM70,000 to build gravity feed water system, but was never completed as the allocation had been exhausted.

“The school’s parent-teacher association, on their own initiative, went to build a dam at a small stream nearby and laid pipes on their own, using their own money. That is the thing that supplies them with water.”

From SK Long Luping, Baru went to SK Long Sukang and found out that the construction of the new building was abandoned because the contractor had some financial difficulties.

“I was told that the teachers do not have enough quarters to live in. I was received in the old building and I tell you, it is really pathetic. SK Long Sukang must be more than 30 over years old and I saw the planks, walls and ceilings are all broken already.”

Baru said the school management was worried about the safety of the students and teachers as the school building was built on unstable ground – a former stream bed.

“The school management is asking for a bigger drain that allows the water to flow into Siang-Siang River not far away. I’m asking the ministry to look into this problem and consider new building for SK Siang Siang as well.”