Tuesday, February 7
You are at:Home»News»Nation»Malaysia widens area of search for missing MAS aircraft
For the freshest news, join The Borneo Post's Telegram Channel and The Borneo Post on Newswav. 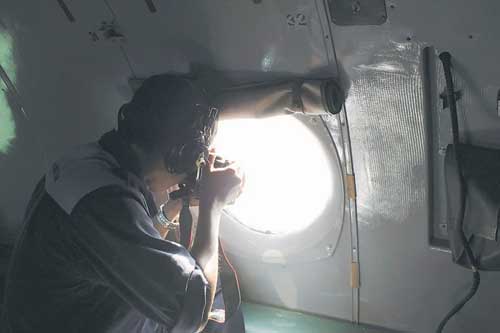 A Vietnamese Air Force officer takes photos from a search and rescue aircraft in the search area for a missing Malaysia Airlines plane, 250 km from Vietnam and 190 km from Malaysia, in this handout photo from Thanh Nien Newpaper. — Reuters photo

KUALA LUMPUR: Malaysian authorities have widened the area of search for a Malaysia Airlines (MAS) aircraft that disappeared yesterday over the South China Sea.

They are being aided in the search by aircraft and vessels of several countries, including Vietnam, China and the United States.

The MAS flight, MH370, lost contact with the Subang air traffic control at 2.40 am, about two hours after taking off from the KL International Airport (KLIA) for Beijing.

It never arrived in the Chinese capital city at 6.30 am (Beijing time) as it was scheduled to with the 227 passengers and 12 crew.

Prime Minister Datuk Seri Najib Tun Razak, who met family members of the passengers and crew at KLIA, said it was decided to widen the area of search after nothing was found at the point 120 nautical miles east of Kota Baharu where contact with the Boeing 777-200 was lost.

The area of search had been widened up to the border with Vietnam, he added.

“We did not find any wreckage,” the prime minister told a news conference at the Sama-Sama Hotel at KLIA in Sepang.

Asean cooperation came to the fore when Singapore and Vietnam offered to help in the search operation. China and the United States also came forward with assistance.

Najib also said that two Bombardier aircraft and two Agusta helicopters as well as three ships of the Malaysian Maritime Enforcement Agency (MMEA) and six vessels of the Royal Malaysian Navy (RMN) were also being used.

The prime minister said theories on the disappearance of the aircraft, including that it was hijacked, were mere speculation.

Flight MH370 was carrying 227 passengers of 14 nationalities when it went missing.

MAS released the passenger manifest which gave the breakdown of the passengers as 153 from China, 38 from Malaysia, seven from Indonesia, six from Australia, five from India, four from France, three from the United States, two each from New Zealand, Ukraine and Canada, and one each from Russia, Italy, the Netherlands and Austria.

MAS Group CEO Ahmad Jauhari Yahya said the plane was piloted by Capt Zaharie Ahmad Shah, 53, who joined MAS in 1981 and has chalked up 18,365 flying hours.

Previous Article‘Say No to Plastic’ paying off with deviant tax for charities
Next Article Austrian, Italian not on missing plane