Monday, February 6
You are at:Home»News»Sarawak»‘Say No to Plastic’ paying off with deviant tax for charities
For the freshest news, join The Borneo Post's Telegram Channel and The Borneo Post on Newswav. 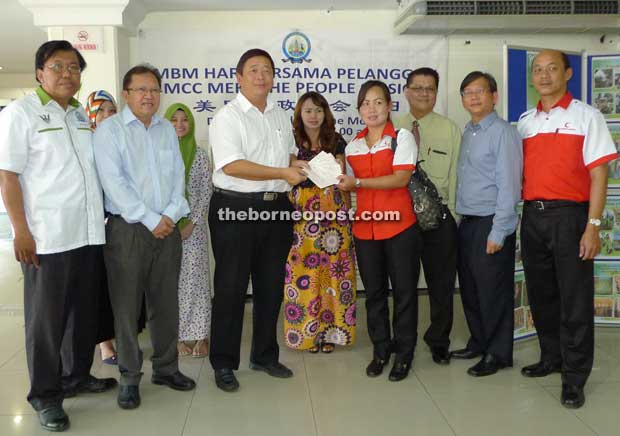 A representative (fourth right) from MRC Miri Chapter receiving the cheque from Mayor Lai while others look on.

MIRI: The ‘contradictory’ result of the ‘Say No to Plastic’ campaign initiated by the Miri City Council (MCC), has turned out to be a blessing in disguise for charitable and welfare organizations in the city.

Although undoubtedly the campaign conducted by participating supermarkets has been hugely successful and well accepted by shoppers in the city, those who still use plastic bags are ironically doing their bit for charity as they pay a surcharge.

This is because 20 cents will be charged to every plastic bag used and consequently donated to charitable and welfare organisations, selected by the campaigners.

For example, from September 2013 to February this year, over RM10,000 was raised through the sale of plastic bags, due to non-compliance, by the participating supermarkets.

The cheque for the amount was handed over by Miri City Mayor Lawrence Lai to the Malaysian Red Crescent Miri Chapter during a meet-the-people session on Friday.

Meanwhile, during the meet-the-people session, Lai said 20 complaints were received by various sections of the council as engineering section topped the list with 14 complaints, mostly on road condition. The others were directed to public cleaning, public health, landscaping and parking.

Lai urged Mirians to take advantage of the monthly session held on every first Friday of the month, from 9am to 11am, to channel their complaints or obtaining any information on the services of the council.