Sunday, July 12
You are at:Home»News»Sarawak»G5 back in SPDP, minus Dr Tiki 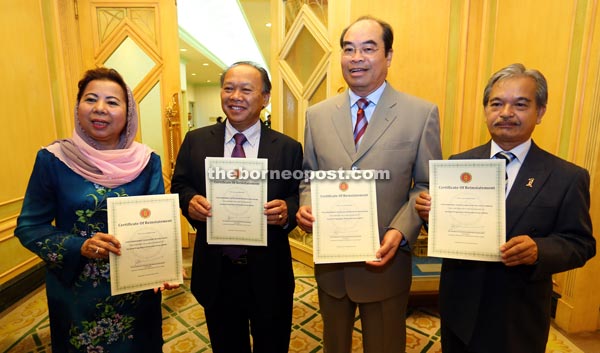 (From left) Rosey, Nansian, Entri and Paulus hold up their certificates of reinstatement of party membership. — Photo by Muhammad Rais Sanusi

KUCHING: SPDP has officially reinstated four of its former leaders, dubbed the Group of Five (G5), thus ending a rivalry that put the state BN in a spot for over two years.

The G5 moniker refers to the four state assemblypersons and Dr Tiki. They were sacked from the party for gross insubordination between November 2011 and January 2012.

However, the four were only reinstated as ordinary members. Before their sacking, Nansian was senior vice-president, Entri and Rosey were vice presidents and Paulus was information chief of the party.

Contented that a settlement had been reached, Adenan said this was good for SPDP in particular and the BN in general.

“This goes to show that we Sarawakians are very compromising and friendly in nature. This is an indication that it is time to move forward.”

Mawan, who is also BN vice- chairman and Minister of Social Development, said reconciliation with the group was the only way forward for SPDP, stressing that party leaders could not bear the continuous fighting with its former leaders and members as demonstrated at Mas Gading and Baram parliamentary constituencies in the last general election.

“Today represents a new beginning in the party. In all sincerity, let’s move on. It is now hoped that we all would be able to work together with the objective to strengthen Barisan Nasional and serve the people better.

“We can now focus on the next state election, which is only two-and-a-half years away, and work
on winning all our seats,” Mawan told reporters after the ceremony.

He explained that the decision to reinstate the leaders was a result of continual assessments the
party had made in the past few years, which made SPDP more aware of their support on the ground.

Mawan said the assessment also revealed areas where BN remained strong and those where support for the opposition was growing.

“In order to counter this, we look at where further consolidation within the BN is needed. We need greater solidarity while looking at the internal situation of the various component parties. We need to look at where it is messy in order to sort things out in the interest of the nation.”

Adding that there was nothing controversial about the reinstatement of the group as ordinary members, Mawan said there were no roadblocks in the party’s constitution for the group to aspire for higher positions in SPDP.

Touching on Dr Tiki, he said: “If it was Umno, Dr Tiki will be kicked out for good, but we (SPDP) will be more liberal on the situation. I’ve talked about reconciliation. I am in a position to forgive and forget, so let’s move on.

“Dr Tiki, as of now, can apply despite not being included in this initial exercise.

“However, we are open to an application from him. We will consider and we have to comply with the general process” said Mawan, who is also Saratok MP and Pakan assemblyman.

With the four former leaders back in the party, SPDP now has five state assemblypersons. The party lost Ba Kelalan and Krian to PKR in the 2011 state election and lost Meluan to Sarawak Workers Party (SWP) due to the resignation of incumbent Wong Judat in August 2012.