Monday, March 30
You are at:Home»Features»Pitcher plant – unique and interesting 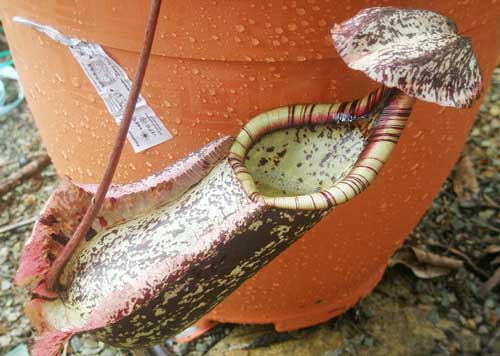 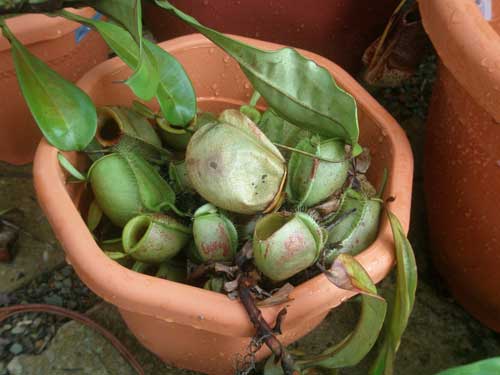 IF you’re caught out in the jungle without a shelter, building one from natural materials around you can help keep you dry and safe, especially when you have spend the night out in the wilderness.

You can use whatever resources Nature provides, but after getting the necessary raw materials – wood or bamboo — you may be left without nails.

Don’t fret. Just look for pitcher plants (nepenthes) and once you’ve found them, your problem is solved. The plants’ lianas or woody veins are the best alternative for nails to build huts or shelters with in the jungle. The lianas can also be used as ropes to bind wood or bamboo, and if kept dry, can last up to a year or longer.

Moreover, the pitchers can double as pots, commonly used to boil rice or tapioca. Normally, flour from these two staples is filled in the pitcher and pinned with a tiny wood, the size of a toothpick. The pitcher is then boiled together with water in the pot for several minutes until the rice or tapioca is cooked.

The pitcher plant has generated a lot of interests among naturalists because of its uniqueness. It’s a species of plant that eats insects.

Also called carnivorous plant, it is found in nutrient-poor soil but still thrives because it obtains nutrition from insects it catches.

Carnivorous plants are predatory flowering plants that kill animals in order to derive nutrition from their victims. They eat things like insects, spiders, crustaceans and other small soil and water-living invertebrates and protozoans, lizards, mice, rats, and other small vertebrates.

A report in sciencedaily.com says pitcher plants rely on insects as a source of nutrients, enabling them to colonise nutrient-poor habitats where other plants struggle to grow.

Prey is captured in specialised pitcher-shaped leaves with slippery surfaces on the upper rim and inner wall, and drowned in the digestive fluid at the bottom.

If an insect tries to walk on the wet surface, its adhesive pads are prevented from making contact, causing it to slip on the water layer.

New research has found that during heavy rain, the lid of nepenthes, especially the gracilis pitcher, acts like a springboard, catapulting insects, seeking shelter on its underside, directly into the fluid-filled pitcher. 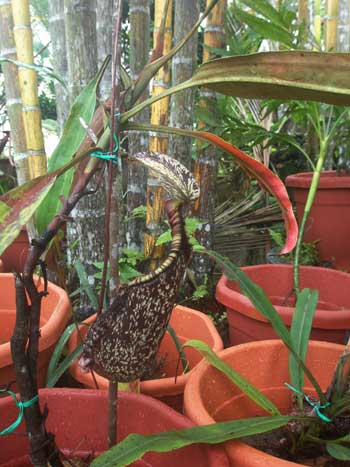 Eve’s cup and others

The pitcher plant is also known by many as Eve’s cup, fly-catcher, flytrap, huntsman’s cup, smallpox plant and water-cup, and is found in abundance in Sarawak.

One need not go to the jungle for a first-hand look at the plant as it can be found at Padawan Pitcher Plant & Orchid Garden at the 10th Mile Bazaar.

The Garden showcases lowland pitcher plants from around Borneo and protected plants in Sarawak. It now has about 30 species — from climbers N albomorginata (Kuching spotted) to non-climbers N ampullaria (Bau green).

Padawan Muncipal Council (MPP) agriculture officer Willie Ngelai, who heads the Landscape Division, said their pitcher plants were collected from the jungles in various parts of the state.

He said N albomorginata are found in the lowland and have narrow felted leaves and stems. This species has large quantities of slender pitchers with a

conspicuous chalky-white collar below the peristome. Its colour varies from pale green to deep red, depending on the type. It consumes insects and termites.

According to Willie, the Kuching spotted, which are climbers, usually survive at altitudinal distribution of 0 to 1,000m above sea level.

“Their typical habitat consists of kerangas forest but they are also recorded from the summit vegetation of lowland parks,” he said.

The non-climbing Bau green are found in lowland areas.

This species produces globe or egg-shapped pitchers, reaching 10-15cm in height. The pitchers forming at the ends of short tendrils are no more than 15cm long.

The young plants are wholly covered with long, caduceus, brown or white hairs. Mature plants often have a sparse indumentums of short, brown hairs though they may be completely glabrous.

The colour of their leaves is green — up to 25cm long and 6cm wide. The pitchers range in colouration from light green throughout to completely dark red with many immediate forms recorded.

Willie said this species fed on dead plant parts and largely moved away from carnivory and digested leaf matter that fell to the forest floor.

This plant grows in damp, shady forest from sea level to 1,000m altitude.

“Through the network of lianas, the peculiarly-formed pitchers of this species gleam fourth, often in tight cluster from the base of the plant,” he explained. 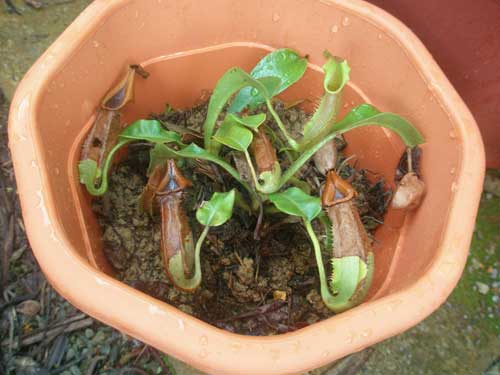 A smaller type of local pitcher plant at the MPP nursery.

Willie said collecting pitcher plants from the jungle involved extracting the whole rooting system from the ground and transferring it into a pot. The plants were then brought to the nursery for monitoring before being transferred to the Padawan Pitcher Garden.

He added that MPP is the only agency licensed by the State Forest Department to extract and cultivate pitcher plants.

“Nepenthes will never produce pitchers if the leaves or tendrils are plucked because the pitchers appear as a result of leaves modifications.

“That’s why we always remind visitors not to pluck the leaves or tendrils otherwise the plant will never produce a pitcher,” Willie pointed out.

A pitcher plant usually consists of a shallow root system and a creeping or climbing stem, often several metres long, and usually around one centimetre or less in diameter.

From the stem arises leaf-like expanded leaf stalks, similar to certain Citrus species, ending in a tendril, which, in some species, aids in climbing. The end of the tendril forms the pitcher, considered to be the true leaf.

The pitcher starts as a small bud and gradually expands to form a round or tube-shaped trap which contains a fluid secreted by the plant, and may be watery or syrupy, and is used to drown the prey.

The lower part of the trap contains glands which absorb the nutrients released from the decaying prey. Along the upper inside part of the trap is a slick waxy coating which makes the escape of its prey near impossible.

Surrounding the entrance to the trap is a structure called the peristome (lip) which is slippery and often quite colourful, attracting the prey but offering an unsure footing.

Above the peristome is a lid (operculum). In many species, this keeps rain from diluting the fluid within the pitcher. The pitcher may contain nectar glands which attract the prey.

The Padawan Pithcer Garden is now temporarily closed for upgrading work. It is expected to re-open early next year.

Willie said the Garden was created for Nature lovers and study purposes.

“It is created on the concept of forest in the urban — a passive zone where visitors can only walk in the park.”

The Garden was opened in 2004 and temporarily closed in 2011 to control the outbreak of hand, foot and mouth disease.

Tree shrews (tupaia montana) and nocturnal rats in the forests of Borneo are said to have a unique relationship with carnivorous pitcher plants, according to the Journal of Tropical Ecology.

The mammals defecate and the pitchers are happy to receive.

A study published on May 31, 2011, showed a species of giant mountain pitcher plants (nepenthes rajah) supplement their diet with nitrogen from the faeces of tree shrews that forage in daylight and summit rats (rattus baluensis) which are active at night.

When the small mammals lick nectar from the underside of the pitcher’s lid, they stand directly over the jug-shaped pitcher organ.

Scientists have found that bats use living toilets made of carnivorous plants, gracing them with their faecal matter.

Other species available at the Padawan Pitcher Plant & Orchid Garden are: