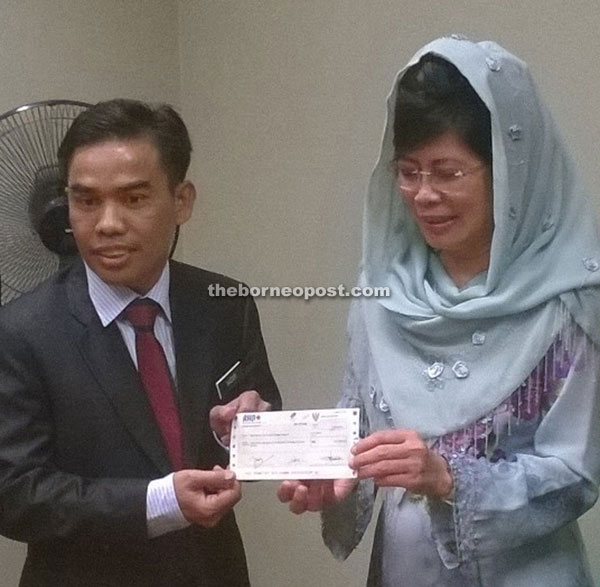 Fatimah handing over the cheque to Hazami.

The RM125,690 project aims to document and preserve ethnic Sarawakian languages for the coming generations and to establish Sarawak as a national reference hub for language, literature and culture. Apart from adding to the availability of quality publications, DBP hopes to eventually gain recognition from Unesco for preservation and conservation of indigenous treasures, said Dewan Bahasa dan Pustaka (DBP) Sarawak deputy director Aminah Awg Basar.

She was speaking at a press conference yesterday after witnessing Women, Welfare and Family Development Minister Datuk Fatimah Abdullah hand over a grant worth RM215,680 to DBP Sarawak deputy director of Language and Literature Development Dr Hazami Jahari.

Fatimah said documentation is important as there is a risk that these languages and culture die out.

“We don’t want to lose the language,” she said, adding that Unesco considered this an important aspect by helping the Bidayuh community at Kampung Bunuk and Kelabit community in Bario preserve their languages under the ‘Endangered Languages’ programme.

The programme entails that preschools are conducted in the native languages by trained teachers.

Meanwhile, RM90,000 of the grant money will go into organising the 2014 Sarawak National Literary Award, which Hazami hoped would be awarded to a Sarawakian.

The prestigious award was given to the late Muhamad Bujang (popularly known as Melati Sarawak) in 1994, and the late Muhamad Rakawi Yusuf in 1995. After a 14-year lapse, it was presented to Datu Dr Adi Badiozaman Tuah, director of Education Bureau Services of the Sarawak Islamic Council.

DBP Sarawak assistant director Shantrol Abdullah was among those at the press conference.