Monday, January 20
You are at:Home»News»Sarawak»KTS hands out incentives to 115 longhouse students 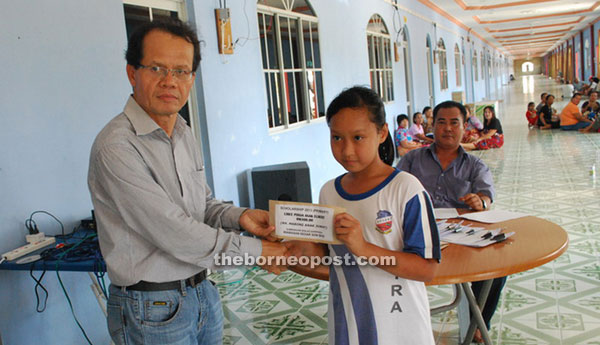 Stephen presents the educational cash incentive to one of the pupils.

BINTULU: Wawasan Sedar Sdn Bhd has contributed an education incentive of RM39,000 to 115 outstanding students from eight longhouses in Sungai Rasan Tubau who had shined in their academic examinations.

The KTS subsidiary company is operating a palm oil plantation along Bintulu-Bakun Road.

According to the project director Stephen Sani, the incentive which is under Community Development Project (CDP) is part of the company’s corporate social responsibility which was implemented by KTS to help students from pre-school to tertiary level who excelled academically.

“This is the fourth year such programme is carried out involving students from Rh Mabong, Rh Ambak, Rh Sambang, Rh Rentap, Rh Karom, Rh Jam and Rh Tait. Residents in these areas have been directly involved in palm oil plantation development project on a large scale in Rasan Tubau area,” he said.

He said as a responsible plantation company which has developed the land, they are not only focused on the aspect of profit alone, but what is more important is to ensure that the wellbeing of the local people are protected by providing significant returns especially in developing the human capital.

Basically he said, the educational incentives are in accordance with the conditions set by the company and every student must study hard to get the incentives.

“This is a long-term programme by KTS to assist the community especially the longhouse residents who live in rural areas to improve their livelihood towards a better future,” said Stephen.

In the meantime, Sebauh SAO David Kala who was also present expressed his gratitude to KTS for its efforts in helping the local community in Sebauh area.

“This is a noble effort of KTS to help produce more scholars among the local community,” he said.