Saturday, February 29
You are at:Home»News»Sarawak»Man found hanged in cemetery 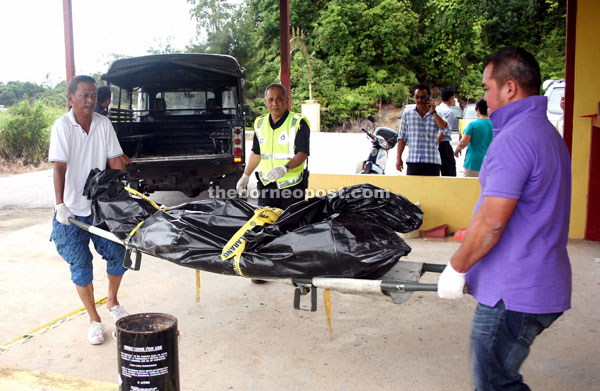 The body of the deceased being removed from the shed at the cemetery.

KUCHING: A couple’s routine visit to a Chinese cemetery at Jalan Batu Kawa yesterday was anything except that they stumbled upon the body of a man hanging from the roof of a shed.

The couple, who chose to remain anonymous, arrived at the cemetery around 8.30am and proceeded to the rear of the shed, which houses the prayer altar, to fetch water when they came across the body.

The deceased, identified as a 34-year-old from Taman Permaisuri in Bintulu based on his MyKad, was hanging from the roof with a green garden hose wrapped around his neck.

Police personnel, led by Batu Kawah station officer-in-charge Inspector Gunong Bilan, arrived at the scene to investigate after being notified by the couple and later transported the body to Sarawak General Hospital for a post mortem.

Two mobile phones and a waist pouch containing RM7 were recovered from the deceased, while a motorcycle believed to belong to him was found not far from the shed.

The case has been classified as sudden death pending the outcome of the post mortem, although initial police investigation appeared to have ruled out foul play.

A source revealed that police had managed to contact the wife of the deceased, said to be a nurse, and informed her about his demise.