Tuesday, July 27
You are at:Home»News»Sarawak»Clouded Leopards seen at Mount Santubong 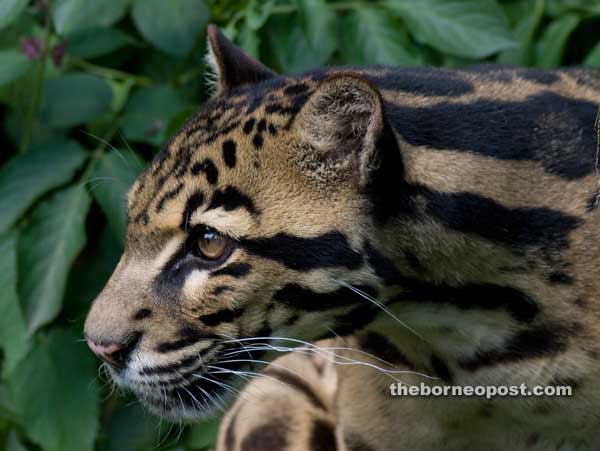 A close-up photo of the Bornean Clouded Leopard. There has been recent reported sighting of clouded leopard on Gunung Santubong.

KUCHING: Malaysian Nature Society has called for an immediate evaluation study of Mount Santubong as a home for Sarawak’s largest cat, the Bornean Clouded Leopard.

In February, there was a reported sighting of three Clouded Leopards on Mount Santubong.

The Bornean Clouded Leopard or ‘Neofelis diardi’ is an endemic medium-sized cat found only in Borneo, known locally as Entulu.

It is the smallest of the “large cats”, which is the general term used for the large members of the Felidae, like the tiger, lion and leopard. At over 2 metres in length, and weighing up to 25kg, this highly endangered cat in Sarawak is severely threatened by hunting and loss of its forest habitat.

“MNSKB has been highlighting the biodiversity and historical importance of Gunung Santubong for many years. With more and more attention paid to Kuching’s iconic mountain, new discoveries are being made,” he said.

This discovery of Clouded Leopards on Santubong, Sebastian pointed out, was yet another addition to Santubong’s increasingly rich wildlife, and not just another wild cat.

“This is Borneo’s top predator, and largest cat,” he emphasised.

The sightings of these Clouded Leopards were made by surveyors up on the mountain, doing preliminary work for the cable car project, revealed Sebastian.

Unlike hornbills, which are flying birds, and will only be affected by the disturbance caused by infrastructure development on the higher parts of the mountain, he said Clouded Leopards will be adversely affected by such projects.

Before any further plans to be made on Santubong, Sebastian stressed that it would be only prudent that a comprehensive study was commissioned to determine the requirements for Clouded Leopards on this isolated mountain, and what measures need to be put in place to ensure their continued, and permanent survival.

“Sarawak cannot afford to lose a population of a highly endangered large endemic cat living so close to Kuching. As arguably the most beautiful of the world’s wild cats, because of its exquisite bold markings, the opportunities are enormous for Sarawak’s, and Kuching’s tourism industry.”

He hopes that surveyors who sighted the big cats may withhold information on the animals’ exact location for their safety and survival.

The MNS, in its continuing efforts to highlight Santubong cultural, archaeological and biological richness, organised the first ever Santubong Nature Festival in 2013.

This year, the second edition of the Festival will be held in November.