Sunday, June 7
You are at:Home»News»Sarawak»‘Exploit Kapit’s tourism potential to the fullest’ 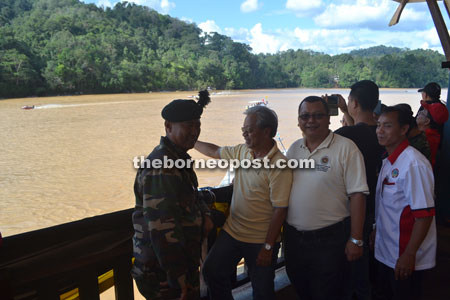 KAPIT: A suggestion was put up by Tan Sri Datuk Amar Dr James Masing for Malaysia Tourism Board and Sarawak Tourism Board to fully tap Kapit’s abundant rivers and rugged terrain as tourist attractions.

The Land Development Minister and Baleh assemblyman disclosed that he had in mind to include power boat and mountain bike racing besides the usual rafting events in next year’s edition of the Baleh-Kapit Raft Safari.

“Baleh-Kapit Raft Safari is a yearly tourism programme to attract tourists to Kapit. Apart from rafting, we have the power boat racing organised by the Kapit Division Power Boat Association while waiting for the rafts to arrive. In terms of power boat racing, Kapit is one of the best places in Sarawak. I am looking at mountain bike, rafting and power boat together in next year’s event,” he said when interviewed by The Borneo Post at the Kapit Terminal yesterday.

“We should have mountain bike event because of our rugged terrain, a gift from God, tap the potential, add value to it as a new tourism product to attract more tourists.

“I hope the Malaysia Tourism Board and Sarawak Tourism Board will create the new product while maintaining the old one. The government must create the product and then the private sector will participate,” he added.

He lamented that the annual raft safari had not grown much ever since it was started in 1996 when he was the minister of tourism by not fully exploiting the natural attractions that Kapit Division had.

Masing has never missed the raft safari since its debut.

Present with him were Ngemah assemblyman Alexander