Tuesday, August 4
You are at:Home»World»Search for missing plane at critical point as black box batteries die 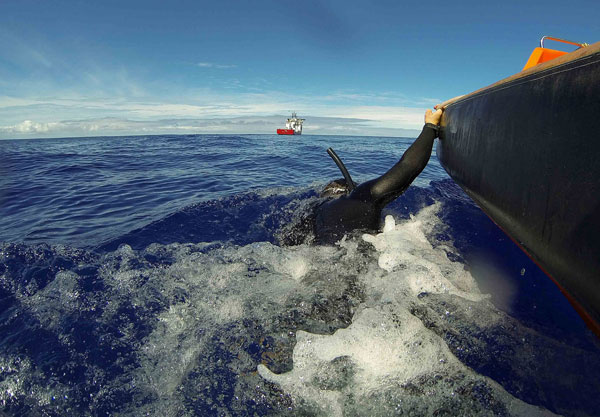 A fast response craft from Australian Defence Vessel Ocean Shield tows Able Seaman Clearance Diver Michael Arnold as he searches the ocean for debris in the search zone in the southern Indian Ocean for the missing flight MH370 in this picture released by the Australian Defence Force yesterday. — Reuters photo

SYDNEY/PERTH, Australia: An Australian ship which picked up possible “pings” from the black box recorders of a missing Malaysia Airlines jetliner has been unable to detect any further signals and time is running out to narrow the massive search, officials said yesterday.

Angus Houston, head of the Australian agency coordinating the search for Malaysia Airlines Flight MH370, said the month-long hunt in the Indian Ocean was at a critical stage given the batteries in the black box beacons had already reached the end of their 30-day expected life.

A US Navy “towed pinger locator” onboard Australia’s Ocean Shield picked up two signals consistent with black box locator beacons over the weekend – the first for more than two hours and the second for about 13 minutes.

Houston said the signals represented the best lead in the search yet, but efforts to pick up the pings again had so far been unsuccessful.

“If we don’t get any further transmissions, we have a reasonably large search area of the bottom of the ocean to prosecute and that will take a long, long time. It’s very slow, painstaking work,” said Houston.

The black boxes record cockpit data and may provide answers about what happened to the plane, which was carrying 227 passengers and 12 crew when it vanished on March 8 and flew thousands of kilometres off its Kuala Lumpur-to-Beijing route.

Authorities say evidence, including the loss of communications, suggests the plane was deliberately diverted by someone familiar with the aircraft, but have not ruled out mechanical problems.

Analysis of satellite data led investigators to conclude the Boeing 777 came down in an area some 1,680 km northwest of Perth, near where possible pings were picked up and the search is now focused.

An autonomous underwater vehicle (AUV) named Bluefin-21 is onboard the Ocean Shield and could be sent to look for wreckage on the sea floor, but narrowing the search zone first was critical, Houston said.

“It is a large area for a small submersible that has a very narrow field of search, and of course, it is literally crawling along the bottom of the ocean,” he said.

“That’s why it’s so important to get another transmission and we need to continue until there’s absolutely no chance the (black box) device is still transmitting.”

The Bluefin will scour the ocean floor in 20-hour missions using sonar in an attempt to find the aircraft, before its findings are downloaded and analysed on board the Ocean Shield.

If anything unusual is spotted, the sonar on board the robotic vehicle will be replaced with a camera to take a closer look.

The potential search area is about 4.5 km deep, the outer reach of the Bluefin’s range.

Some 133 missions have been completed so far in the multinational aerial hunt for debris in the southern Indian Ocean and would continue, officials said.

Up to 11 military planes, three civilian planes and 14 ships planned to take part in the search yesterday, with good weather in the search area.

But so far, searchers have only turned up fishing gear and other detritus.

“Even after the black box is found, the surface search will continue because they’re looking for evidence to investigate why the aircraft went down,” Lieutenant Commander Adam Schantz, the officer in charge of US Navy P-8 Poseidon search unit, told Reuters.

“So, we’ll continue for a while trying to find anything on the surface that might give a reasoning behind the accident.” – Reuters