Saturday, July 11
You are at:Home»Features»Nading Rhapsody finds its voice 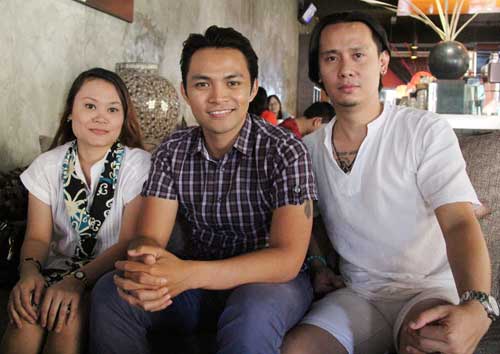 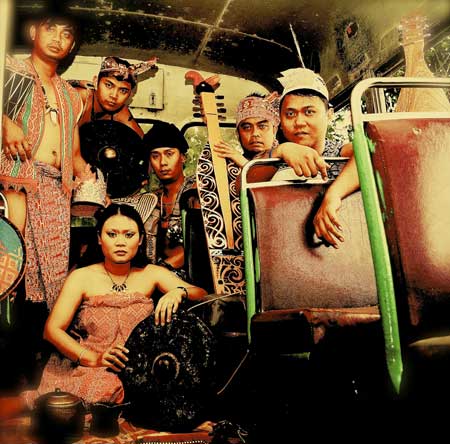 NADING RHAPSODY — drawing inspiration from Iban-Bidayuh folklore and musical forms and exploring other influences, including Orang Ulu, Melanau and Penan.

IF it was not for a heart-wrenching decision in April 2012 to break up their music group, members of the cross-cultural ethnic music band Nading Rhapsody (NR) would not have realised how much they loved music and the band would probably not exist today.

Then performing under a different name and management, the young eight-member group was seen to be a promising rising star among the contemporary ethnic music groups in the country, having just performed at a number of high profile international and local music festivals and events.

However, the pressure of show schedules, friction between various parties as well as individuals and creative differences led members to finally decide to call it a day and part ways.

“Of course we felt sad as we had been together for so long. The strange thing was that not long after we broke up, a number of seemingly random events and coincidences took place, as if something was trying to show us we should get back together,” recalled Royston Kulleh (lyrics-vocals-chants) who sat down for a chat over coffee with thesundaypost together with Azhfar Raimi (vocals-chants) and Christ Sheldon Merun (lyrics-chants-dance).

After just a few months of splitting, the group’s members who all kept in close touch and remained friends, arranged to meet up for a jam session just for old times’ sake. One session led to another, and another, and before long, they realised how much they really missed playing and creating music together.

The decision to sign up for The Rainforest Waterfront Fest 2012 Talent Search, co-organised by the Sarawak Tourism Board (STB), was another trigger factor which led them to decide reunite.

They decided to take the name Nading Rhapsody after Nading Grasi, a well-known hero-adventurer figure in Iban myths and folklore, who was believed to live among the peoples of Borneo after being expelled from Panggau Libau (the equivalent of heaven or Garden of Eden) for his rebellious nature.

“We are inspired by his journeys and what he did as he went around sharing stories and tales of his adventures with everyone and how he fought for what he believed in and the cultural legacy he left.

“Even though in the folktale his people and community eventually forgot what he did, but in our own way and style, our group is the new generation who are continuing this kind of fight in the same tenacious spirit he had,” said Azhfar, a petite lass with a ready smile, explaining the significance behind the group’s name.

Much to the group’s surprise, they beat out their competition to emerge champions of the talent search. The triumph also earned them the right to perform on stage at the Rainforest World Music Festival (RWMF), the state’s crown jewel tourism attraction and one of the world’s most recognised international music festivals. 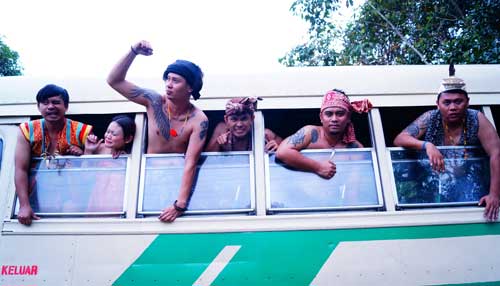 The band hitting the road after getting back to play and create music together.

The victory reaffirmed their conviction that they should continue performing together and also marked the beginning of a new direction in their musical development.

The break-up gave them the opportunity to start with a clean slate.

“Before we could tell outsiders about our culture, we had to go back to the basics and our roots to discover it for ourselves,” Royston recalled.

As the group delved deeper into native folklore and traditions, their music also began to incorporate the spirituality and tacit meanings which underline many of these cultural practices and oral histories.

“As far as we know, there are now very few groups who have this spiritual aspect such as chanting as a main component of their music. Among the older generation, yes, as it was practised more commonly but among our peers, it is not so common,” Royston noted.

They see their part as that of modern-day troubadours, who sing of heroes, villains, gods, men, maidens, witches, folktales and legends of the people through music, song and dance.

Presently, they draw their inspiration mostly from Iban and Bidayuh folklore and musical forms but are also exploring other influences, including Orang Ulu, Melanau and Penan.

The group believe changing their focus from making traditional music contemporary to interpreting the traditional and spiritual in an avant-garde way, will also help them re-ignite sparks of curiosity and pride among the youth of this generation in their cultural heritage.

They strongly disagree with the suggestion they should keep purely to traditional music, pointing out that the true spirit of honouring one’s culture doesn’t always mean doing things exactly the way it was done by their forefathers although it was important to know the how’s and why’s.

“We have to do something different to give a fresh face to the music, attract local listeners and grow our local audience. If we depend 100 per cent on pure traditional, we can still go far because of the high demand from the mat salleh (foreigners) because they see our ethnic music as something new. But what about our own people,” Royston said, highlighting the paradox of strong foreign demand for Sarawak music, but relative lack of interest among local audiences.

Azhfar agreed: “We are trying so hard to get foreigners to like our music, but what about the younger generation of own people? Do they like our music? We must think how we can show and share the beauty of our own heritage with our own people.”

“Some of our traditional music forms and instruments can be said to be extinct because no one practises them now. It’s sad to see our own people not appreciating what we have now and we elevate western music forms above our own, not realising our music is held is such high esteem in the west.

“Not only that, the reality is as the older generation of traditional master musicians pass on, there is no one among the younger generation to take up their mantle and carry on the knowledge and skills.

“It would be tragic if there comes a time when the younger generation finally wants to learn but there is no one left to teach them. We, as NR, want to continue the legacy. We want to honour our origins and roots,” he added.

It is a shared noble aspiration tinged with hope but also underlines deep concern at the rapid rate of dissipation of local identity – something the group’s young members can relate to coming from a generation who increasingly find themselves adrift in the distractions of modern living.

While the passionate musicians and performers making up NR may not yet have all the answers to the questions they ask themselves and young Sarawakians everywhere about who they are and where they come from, one thing, for sure, is t they are not willing to let other people decide for them — neither are they satisfied with taking “no” for an answer.

Royston acknowledged learning how to manage the group on their own has been and still is a steep learning curve but feels ultimately, it was the right decision.

Not only did it cultivate business acumen on how to manage and market their group but also allow them to explore and experiment creatively with their musical direction.

“At first when we started NR, we were trying to do our own repertoire in a provocative way with our young spirit. But along the way, we learned a lot from our previous music festivals and music friends — that there is a better way of doing it. We are not breaking the rules but being ourselves,” Royston shared.

Fresh from performing at the recent Penang World Music Festival, NR now have their sights set on the this year’s RWMF which will be held at Sarawak Cultural Village this June 20-22.

Asked what they had planned for their return to the RMWF, the group preferred to keep their cards close to their chest for now.

“There are basically two types of listeners who will be there – those seeking a personal, more spiritual connection and those who want to just get up and dance and be entertained. Our goal is to cater to both these groups,” said Royston, smiling.

To find out more about Nading Rhapsody and their upcoming performances, visit their Facebook page at http://www.facebook.com/nadingrhapsody or contact them via email at [email protected] or Twitter @nadingrhapsody.

Previous Article‘Roads in Tudan to be upgraded and improved this year’
Next Article Entri: Gravity-feed water supply initiative a ‘has been’