Saturday, July 4
You are at:Home»News»Sarawak»A maritime museum for Kuching

KUCHING: The old Brooke Dockyard near Kuching Esplanade will soon be transformed into a maritime museum.

Tourism Minister Datuk Amar Abang Johari Tun Openg said discussions between the Tourism Ministry, Museum Department and the owner had been done and the project would be part of the Kuching Waterfront extension programme.

“We are now performing a detailed study on the project and it will involve the construction of facilities and improvements to the site. We are estimating a cost of around RM5 million for the project,” said Abang Johari.

He was met by reporters after visiting the Bintangor Waterfront yesterday.

Abang Johari, who is also the Satok assemblyman, added that two historical items would be retained – the dry dock and the crane, which are the first ever in Sarawak.

“The project will commence under the 11th Malaysia Plan and we will classify it as a heritage site upon completion,” he said.

He also said under the 11th Malaysia Plan, upgrading works to the embankment along the river from Kampung Sungai Bedil up to the jetty of Kampung Tanjung would be carried out.

“The project will complement a similar project opposite the site with the construction of Kampung Bintangor Waterfront which is expected to be completed by September this year,” he said.

He added that a small bridge would be constructed to link both sides of the Bintangor river mouth, with future plans to link the embankment project up to Kampung No.4.

“What is important now is to beautify houses along the river and light up the areas up to Medan Niaga Satok. This will boost the tourism aesthetics while at the same time promoting the use of riverine transport,” he said. 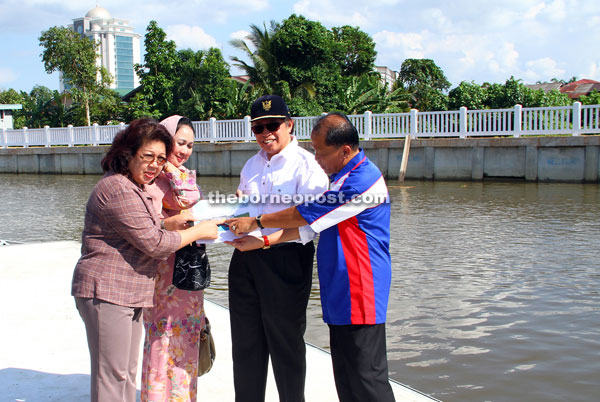 Abang Johari (second right) looks at the proposed plan of the Kpg Bintangor Waterfront as (from left) Saadiah, Sharifah Hasidah and a personnel from Sarawak Rivers Board look on.

The old site of Brooke Dockyard will be transformed into a maritime museum at a cost of RM5 million.

“With the improvements to the riverine of Kuching, I believe that it will be able to emulate the looks similar to Brisbane and Shanghai,” he said, adding that the project would use green technology such as electric-powered boats.

Later, he disclosed that Sarawak Rivers Board had plans to upgrade the jetties at Kampung Kuap and the old Batu Kawa Bazaar.