Sunday, June 7
You are at:Home»News»Sarawak»Mukah to have new airport sooner than later 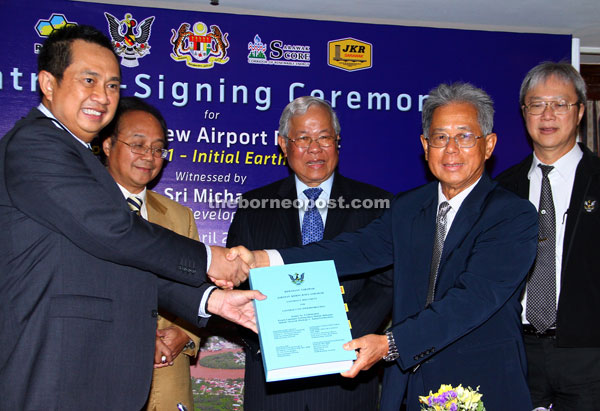 KUCHING: The dream of Mukah folk to have a bigger and better airport will become a reality sooner than later now that a contract to build a new airport was signed here yesterday.

The RM133-million earthwork will begin tomorrow and will be completed in 20 months’ time.

Signing on behalf of JKR was its director Zuraimi Sakhi while Hock Peng Furniture & General Contractor Sdn Bhd was represented by its chairman and managing director Datuk Toh Chiew Hock.

“On completion, the new airport, a Code 3C airport catering for ATR72 or F50 aircraft, will help to speed up economic activities at the coastal area and also to sustain the economic development brought about by Sarawak Corridor of Renewable Energy (SCORE).

“The airport will not be able to cater for Boeing B737 or Airbus A320 aircraft but it will be built in such a way that it can be quickly upgraded to Code 4C airport when the need arises in future.”

Manyin said Hock Peng Furniture & General Contractor Sdn Bhd was among 20 companies that bid for the proposed airport situated 7km southwest of Mukah- between the town and Mukah Polytechnic.

To a question from the media, Manyin said the airport project had nothing to do with the recent Balingian by-election but something that had actually been long planned by the government.

“The airport will help to cater to development expected to take place in the central region and SCORE. We are most grateful to the federal government for looking into our needs.”

He said the estimated cost of the five-year project was RM340 million and of the amount RM133 million was for the earthworks which included site clearing, removal of unsuitable top soil and treatment of the underlying soil by installing ‘wick drains’.

“The initial earthwork is expected to be completed by December 2015 while the next phase of the work will take another 24 months to complete,” Manyin said.