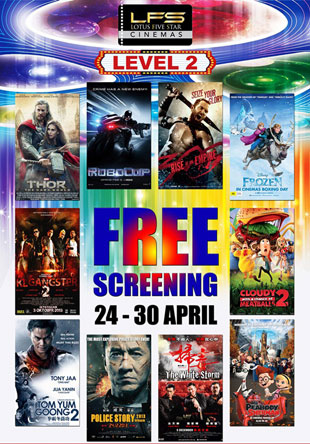 Moviegoers just need to print out the coupon from www.facebook.com/LFSCinemasMY and present it at the box office counter.

Each coupon can be exchanged for one movie ticket, with a maximum of four tickets redeemable per person with each movie coupon presented.

As screenings are limited, the redemption will be on first come, first served basis.

LFS Summer Shopping Mall features 12 screens and has a total seating capacity of 2,038.

It will also be the first to bring the Dolby Atmos sound system to East Malaysia and feature a Lotus Hall as well as a Five Star Hall, which has a giant screen.