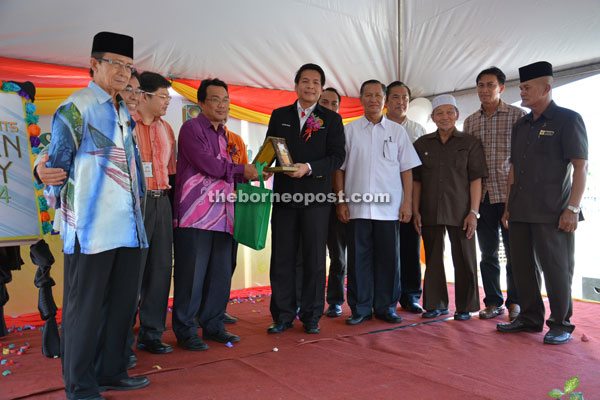 Ngau (front fourth right) receives a memento from Hallman during the launching ceremony of the Open Day.

MIRI: School leavers are advised to continue their studies in relevant fields so as to be competitive in the job market.

Telang Usan assemblyman Dennis Ngau Jok said they should not be influenced by peer pressure in choosing their courses, which they might regret later.

“Don’t register for a course just because your friend is taking the same course, but enrol for courses of your interest and which are relevant for your future,” he said during the Open Day of Pusat Pembangunan Kemahiran Sarawak (PPKS) Miri and i-CATS recently.

He further said the courses they choose should be relevant to the job market.

“Thus, students should seek advice from professionals on what course to take,” he added.

Commenting on PPKS and i-CATS, Ngau expressed confidence that both institutions offer interesting courses relevant to the job market.

“I was made to understand that within six months after completing their courses in PPKS and i-CATS, up to 70 per cent of the graduates secured jobs,” he revealed, saying programmes offered by the two institutions are certified by the government and are of international standard.

At the same time, he told the students that learning is a lifelong process to gain knowledge and experience.

The objective of the Open Day was to promote the programmes offered by both institutions of higher learning.

The two-day programme was held at PPKS building in Lutong and attended by more than 100 students and their parents.