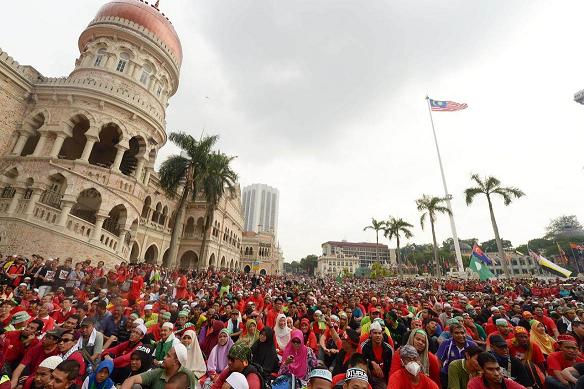 KUALA LUMPUR: The rally of protesters against the Goods and Services Tax (GST) ended earlier in the federal capital here yesterday evening, as some were found to have violated the Peaceful Assembly Act 2012.

Despite the protestors achieving their aim of marching towards the iconic Dataran Merdeka, some were seen to have taken children to the street protest, with banners and hailers (loud speakers), which violated the Act.

The march with police permission was initially scheduled to end at 5pm but was ordered to end at 4.30pm.

When met, the protesters said: “No caretakers for their children, so they were left with no choice but to take their children along, amid the unbearable heat since 1pm.

On Tuesday, Kuala Lumpur police chief Datuk Seri Salleh Mohmad at a press conference had warned protesters and the organiser to comply with the Act for the sake of public safety.

He said no children, speakers, banners and weapons were allowed during the march.

The Act allows citizens to organise and participate in assemblies peaceably and without arms, subject to restrictions deemed necessary and in the interest of public order and security.

A check by Bernama also found protesters carrying provocative banners and posters with the words ‘GST is an Extreme Tax, a Betrayal to the Malaysian Malaysia,’ ‘Do not want the GST’ and ‘Trans Pacific Partnership Agreement (TPPA) makes Malaysia the American colonies’.

Some protesters were also seen to have turned the rally into a political ground with the slogan, ‘Barisan Nasional Destroyed (BN)’, ‘Fall of Umno’ and ‘Reformasi’.

While a pro-opposition news-portal (MalaysiaKini) reported some 50,000 people took part in the rally, Dang Wangi police chief ACP Zainuddin Ahmad immediately rubbished the claim and estimated it was only about 15,000 who joined in the protest.

Jalan Tuanku Abdul Rahman nearby was crowded with protesters, mostly wearing red and yellow, as they walked towards Dataran Merdeka, thus disrupting the traffic flow for other road users.

Jalan Sultan Hishamuddin heading towards Dataran Merdeka was also congested due to the protest participants’ cars parked haphazardly along the roadside.

Some participants were seen converging in Jalan Raja next to Dataran Merdeka at 1.15pm.

Traffic congestion in the affected areas was also made worse by participants gathering on the road and being provocative at the same time, by shouting anti-government slogans, honking, jeering and singing using loud hailers.

The rally also saw youth participants waving rainbow banners with the words, ‘LGBT Gay, Lesbian, Bisexual and Transsexual’ and protest against of GST.

Anwar, in his speech claimed the GST was a form of oppressive tax and urged that more such gatherings be held in the future.

The road at the Sultan Abdul Samad Building was re-opened to motorists at 5pm.

Surprisingly, before leaving the Dataran Merdeka, there were some protesters who hurled a ‘smoke bomb’ before a scuffle broke out with some media representatives.

In Kedah, Prime Minister Datuk Seri Najib Tun Razak, at the Labour Day Celebration Servants Year 2014 said despite the protest, the GST would be implemented next April as it would greatly benefit the country economically and the people, as a whole.

Former prime minister Tun Dr Mahathir Mohamad stressed that a massive demonstration to topple the government was far diverted from the path of democracy.

Meanwhile, a tourist from Hunnan, China said he and his colleagues were forced to cancel plans to visit the Dataran Merdeka due to the rally.

“I saw a handful of policemen patrolling the Dataran Merdeka and we were told the people were not allowed to go there…and we had to re-route to the Central Market to shop,” said Huang Hu Keng, 35, who spoke in Mandarin.

For Iswan Hussain, 24, the rally made the city look unpleasant, especially during the holiday.

As for businessman Ainon Yatimi, 49, the loud noise created by the protesters scared most of the traders and customers.

Taxi drivers also condemned the rally, describing it as meant only for publicity to gain public sympathy. — Bernama