Tuesday, December 6
You are at:Home»News»Nation»KLIA2 takes off 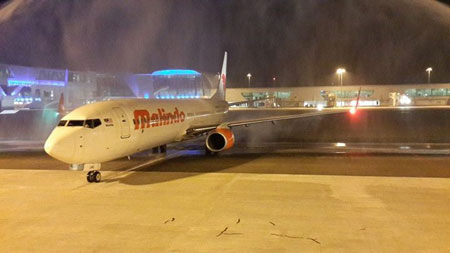 The first aircraft scheduled to take off from the airport will be a Cebu Pacific Airways flight (Flight 5J502) to Manila with estimated time of departure at 3.15am also today.

‘Goodie bags’ were distributed to the 110 passengers of the Malindo Air flight will also be given to the 147 passengers who will be on the Cebu Pacific Airways flight.

Earlier at 10.20pm (yesterday), the check-in process began and proceeded without any hitches.

The first passenger to check in, Gemma Camarinta, 39, who was travelling to her hometown in Bohol, Philippines said she was happy and excited to be part of the historical event.

A frequent user of the previous Low Cost Carrier Terminal (LCCT) here, she said the new hub was more comfortable, and easier to reach where one could use the Express Rail Link (ERL) straight to the terminal.

Another passenger, Ace Perez, 30, said compared to the LCCT, KLIA2 was much more better because it was spacious, comfortable and clean.

“I like the route because it is easy to be reached from the highway. I am happy with this new building compared to LCCT because there I had to walk very far to get to the aircraft,” he said.

Meanwhile, MAHB in a statement said airlines starting to operate from KLIA2 today were Malindo Air, Cebu Pacific Airways, Lion Air and Tiger Air while AirAsia will move to KLIA2 by May 9.

Gateway@KLIA2, which duals as a public transportation hub that has a fully gated car park which can accomodate 6,000 vehicles, ERL, taxi and bus service, and retail mall of 350,000 sq ft with over 200 outlets also commercially opened for public today, according to the statement.

MAHB said the LCCT will cease operations after May 9, and for the convenience of passengers, complimentary shuttle bus service between KLIA2 and LCCT will be provided from May 1 until May 15, and is available every 15-20 minutes.

The immigration, security and customs counters at LCCT will also continue to operate until May 9, and passengers are advised to contact their respective airlines to confirm details of their flights to avoid any inconveniences.

At a press conference after the arrival of the Malindo Air flight, Abdul Aziz said the opening of the terminal went very smoothly and as planned.

“We have proven that everything would proceed as scheduled as we hand announced before. We are proud as this (KLIA2) has become the latest Malaysian icon,” he said.

Abdul Aziz said the cost of the terminal was within the RM4 billion budget which had been allocated earlier, and that a total of 22 million passengers were expected to use the terminal this year.

He said the government was optimistic that more airlines would want to set up their operations there in the future. — Bernama