Sunday, September 19
You are at:Home»News»Sarawak»Scotsman wants to meet his ‘Time Twins’ 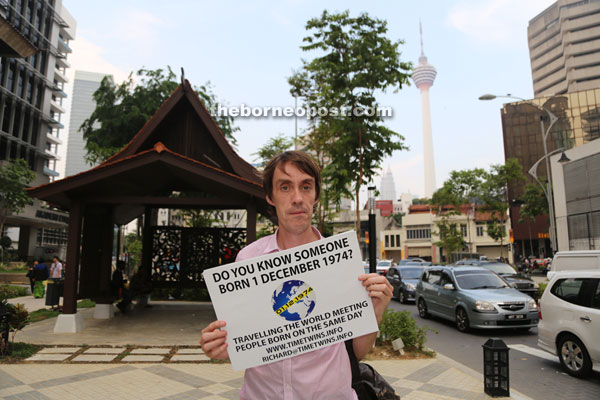 KUCHING: If you were born on Dec 1, 1974, your ‘Time Twin’ Richard Avis wants to meet you when he arrives here next week.

Born in Dumfries, Scotland, Avis embarked on the Time Twins Project after wondering what life would have been like if things had turned out differently.

Egged on by three friends, Avis set off on a mission to meet his Time Twins from around the world before he turned 40.

According to his website at timetwin.info, he has met 31 of them so far.

To date the team has met a film-maker in New York City; the mayor of a town in Italy that was hit by an earthquake; a Swedish lawyer and horticulturist; an English drummer from the UK’s number one Smiths tribute band; a Dutch female bodybuilding champion; a Norwegian Olympian; an Irish novelist; an Austrian footballer; a Croatian academic; a Slovenian cultural ambassador and a Latvian marketing executive. They also met an Australian speedway driver, guitarist, entrepreneur and neuroscientist; a politician and tour guide in Indonesia; an Iranian-born musician and Chinese-Malay businessman in Kuala Lumpur.

The Time Twin Project asks questions such as what kind of lives they have lived, their greatest achievements, their triumphs and tragedies.

While they all share the same date of birth, they are diverse in ethnicity, gender, religion, occupation and social background. Some are famous; most are not.

As well as providing fascinating insights into their lives, the Time Twins introduce their countries, cultures and events that have shaped them to the team. There is a one in 25,000 chance that someone shares the same date of birth.

Avis has yet to identify any Time Twins in East Malaysia, but is hopeful of meeting some here. He can be contacted on [email protected]

For details go to www.timetwins.info.