Tuesday, June 15
You are at:Home»News»Sarawak»Timely cries from baby save family from fiery end 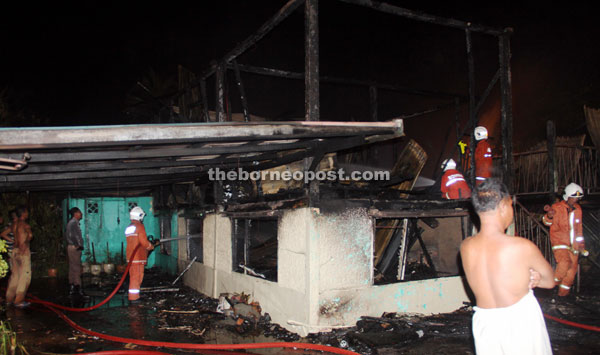 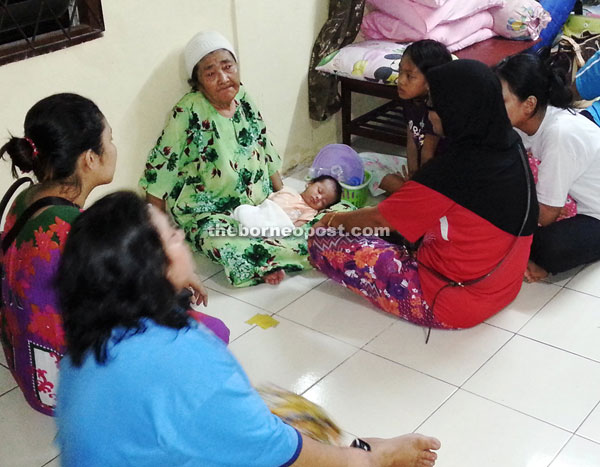 Sane’s wife cradling her great-grandson as Rozana (left) and other relatives comfort her following the fire.

KUCHING: A month-old male infant saved the lives of his extended family after his cries for his night-time feed alerted his mother to a fire which ended up razing their house to the ground.

The incident occurred around midnight yesterday at Kampung Pulo Ulu in Petra Jaya when the baby’s mother, identified only as Rozana, 27, woke up to feed him and smelled smoke inside her bedroom.

She immediately alerted her husband Iskandar who, together with his uncle Ayub Sane, went downstairs to check and saw a room adjacent to the living room engulfed in flames, prompting them to alert the entire family to evacuate.

House owner, Sane Edi, 75, told reporters that the flames gutted his 40-year-old house within minutes and prevented anyone from salvaging any of their possessions.

Sane’s wife, meanwhile, expressed her relief that the whole family was able to escape with their lives, and dubbed her month-old great grandson their hero for his timely crying.

“Had he not cried for his feed, we might have discovered the fire too late and might not have been able to escape in time,” she said.

Iskandar and Ayub later sought outpatient treatment at Sarawak General Hospital, with the former suffering light injuries on his right arm and the latter complaining of breathing difficulties.

Petra Jaya Fire Station chief Mohd Raffy Saibi disclosed that a total of 23 firemen were involved in the operation to put out the fire following a distress call received at 12.01am.

He said the first fire engine arrived at the scene at 12.12am, and immediately went about dousing flames which had gutted about 80 per cent of the double storey structure.

“An adjacent house was slightly damaged in the incident, but we were able to control the situation within 10 minutes and prevented the fire from spreading to several other surrounding houses,” he added.

The cause of the fire is currently being investigated, although Sane’s son Ayub said he believed it was the result of a short circuit.

Total loss suffered by the family has yet to be ascertained.