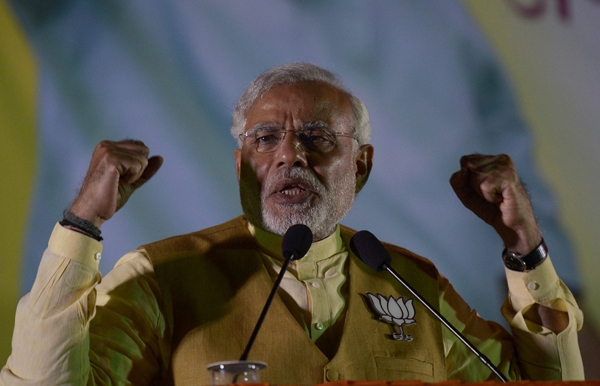 Modi gestures as he speaks during a campaign rally in Kolkata. — AFP photo

NEW DELHI: US President Barack Obama pledged to work closely with the new Indian government as Hindu nationalist Narendra Modi was forecast yesterday to have pulled off a crushing victory in the world’s biggest election.

“Modi at Delhi Gate” said a headline in the Mail Today, while the Hindustan Times read simply “Exit Polls: Enter Modi” after a flurry of surveys released after voting ended Monday pointed to a decisive result.

All the polls showed Modi’s right-wing opposition alliance trounced the left-leaning Congress party which has been in power for a decade, and most indicated that it had scraped enough votes to form a new coalition without having to seek fresh partners.

Modi’s top aide predicted that the margin of victory would be even wider when the results are announced on Friday, while emphasising that the Bharatiya Janata Party (BJP) leader was open to forging new alliances.

Modi struck a conciliatory tone by saying it was time for “healing” after an often bitter five-week contest which saw 551 million voters cast their ballots, making it by far the world’s biggest election.

While a BJP victory had been expected, the apparent scale of defeat for Congress was still striking with exit polls showing support for the party which has ruled India for most of the post-independence era at a nadir.

Obama, leader of the world’s second biggest democracy, said India had “set an example for the world” as he hailed the contest as “a vibrant demonstration of our shared values of diversity and freedom”.

“We look forward to the formation of a new government once election results are announced and to working closely with India’s next administration to make the coming years equally transformative,” he added.

Modi’s election however presents something of a headache for the US, which refused to deal with him for years in the aftermath of religious riots in the state of Gujarat in 2002 shortly after Modi became its chief minister.

More than 1,000 people, mostly Muslims, were killed in the violence which critics say Modi did little to stop, even though he has been cleared of involvement by the courts.

Washington only ended its boycott of Modi in February when Nancy Powell, the outgoing US ambassador to India, met him for talks in Gujarat.

European countries also refused to deal with Modi for years in the wake of the 2002 riots, for which Modi has refused to apologise.

While some of his most ardent supporters are drawn from the ranks of hardline Hindu groups, Modi fought a campaign based on pledges to revive economic growth, which is at its lowest rate in a decade, and increase development.

Congress also suffered a backlash after a spate of corruption scandals which plagued outgoing Prime Minister Manmohan Singh’s government since he was re-elected in 2009.

An editorial in yesterday’s Indian Express said that Singh’s “second term was marked by a tangible and growing disenchantment of the people” but added that the record 66 per cent turnout showed the “palpable yearning for change that marked this election among voters across the country”.

Four out of the five exit polls released after voting showed the BJP-led alliance just reaching the 272-seat threshold needed to form a majority in the 543-member national parliament.

Exit polls, however, have been off the mark in the past and Modi’s chief lieutenant Amit Shah said he expected a more resounding victory.

“My personal view is that we will get around 300 seats. We will still be open to support and collaboration from any party that wants to work with a government that is committed to work for the nation,” he told the Headlines Today network.

Even if the BJP-led alliance does pass the 272 threshold, Modi is still likely to need more partners in order to have a stable coalition.

Many analysts have predicted he will strike a deal with a Tamil Nadu-based party which the polls predicted would get around 30 seats.

“This is the right time to look ahead. It is a time to connect with each other,” Modi said in a post-election blog.

“Let us place people over politics, hope over despair, healing over hurting, inclusion over exclusion and development over divisiveness,” added Modi, who is the son of a tea-stall owner.

Congress’s campaign was fronted by Rahul Gandhi, the scion of India’s most famous dynasty and whose appetite to become prime minister – a post held by his father, grandmother and great-grandfather – has often been questioned.

Modi has derided Rahul as a reluctant “prince” whose lacklustre campaign has latterly been overshadowed by his sister Priyanka’s electioneering. — AFP