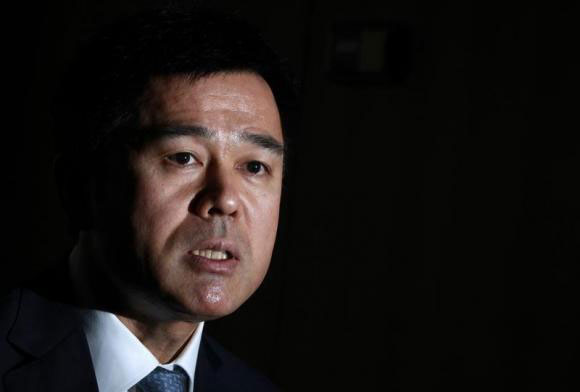 Sato is seen speaking during an interview with Reuters at the central bank in Tokyo. Sato has proposed changing the central bank’s assessment of prices to say that risks are tilted somewhat to the downside, highlighting skepticism within the board that Japan would be able to decisively beat off deflation in a year’s time. — Reuters photo

BANK of Japan (BOJ) board member Takehiro Sato proposed changing the central bank’s assessment of prices to say that risks are tilted somewhat to the downside, highlighting skepticism within the board that Japan would be able to decisively beat off deflation in a year’s time.

The minutes of the April 30 policy meeting released on Monday showed Sato had also called for changing the wording of the central bank’s price target, suggesting a loosening of BOJ’s commitment to achieving its two per cent inflation goal by the end of the next fiscal year.

The proposal was rejected by an 8-to-1 vote, with the BOJ maintaining its stance that risks to prices are finely balanced.

However, Sato’s views highlight the lingering uncertainty about the price target that could cause the central bank to alter its bullish forecast later in the year.

“Inflation is likely to slow as the impact of yen depreciation from last year falls out of the year-on-year comparison,” said Hiroaki Muto, senior economist at Sumitomo Mitsui Asset Management Co.

“Once this happens it will be difficult for the BOJ to maintain its aggressive outlook. Sato is merely trying to offer a more honest description of prices.”

The BOJ aims to achieve two per cent inflation in about a year from now with an aggressive quantitative easing scheme it put in place last year.

Sato has expressed his doubts about this target before, but taking the additional step of making a proposal to change the central bank’s language places him in a group with other skeptical board members Sayuri Shirai and Takahide Kiuichi.

Shirai and Kiuchi have repeatedly proposed changes that would loosen the timeframe for achieving two per cent inflation or limit the central bank’s commitment to continuing with its massive purchases of government debt and risk assets.

None of their proposals has won any supporters, which shows that the remaining six members of the board form a solid core that is committed to the price stability target.

Still, signs of disagreement on the board highlight the fact that there are still many skeptics more than a year after the BOJ overhauled its monetary policy to end 15 years of mild deflation.

At the meeting on April 30, the BOJ left policy unchanged and issued consumer price forecasts for fiscal 2016/17, which show it expects to comfortably meet its inflation target.

At a subsequent meeting on May 20-21, BOJ Governor Haruhiko Kuroda expressed such optimism in the economic outlook that some economists started scaling back their expectations for additional easing.

The central bank has stood pat on policy since launching an expanded quantitative easing in April 2013, when it pledged to accelerate inflation to two per cent in roughly a year from now, via aggressive asset purchases. — Reuters