Monday, September 26
You are at:Home»News»Nation»Police unearth laboratory processing Ketamin, a first in Malaysia 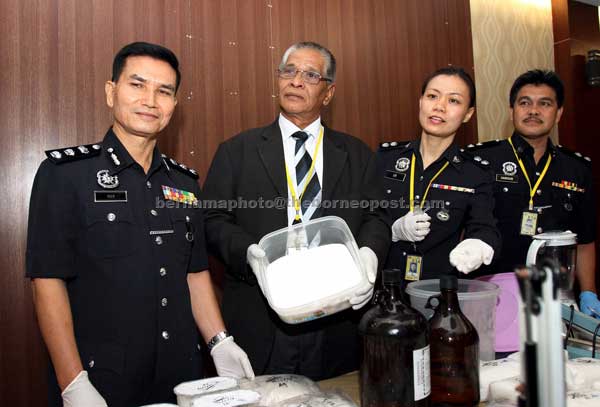 KUALA LUMPUR: For the first time in Malaysia, the police have unearthed a ketamin-processing laboratory.

Initial police investigations revealed the duo, from Sungai Petani, Kedah had masterminded the entire drug operation from producing the ketamin to distributing the drug in the Klang Valley.

The suspects, aged 44 and 51, have been remanded for a week under Section 39B of the Dangerous Drugs Act which carries the mandatory death penalty upon conviction.

Apart from seizing the drug worth a total of about RM720,000, the police also found 200 ecstasy pills in the suspects’ possession.

From the car boot, three plastic packages of ketamin weighing 2.49kg were seized.

He said 200 ecstasy pills, chemicals and drug-making paraphernalia were also found in the condominium.

“Our investigations revealed the two suspects had been carrying out drug-related activities over the past eight months ago as they had ‘transformed’ the condominium into a laboratory.

“Renting the premises for RM2,200 a month, they also distributed the drug in the Klang Valley,” he said, adding that one of them was detained previously for possession of a dangerous weapon. — Bernama